Discovering the Wildlife of the Galapagos

With the arrival of Charles Darwin in 1835, the Galapagos Islands became world-famous for their peculiar and uniquely adapted fauna. Today, the archipelago is synonymous with biodiversity and modern evolutionary thought. However, with over 14 islands and thousands of miles of ocean, the average person knows very little about the true extent of the spectacular life that has evolved in these islands. While this promises a spectacular one-of-a-kind trip, it is easy to become overwhelmed when planning a Galapagos vacation. Below we offer an introductory guide on the marine and terrestrial wildlife of the Galapagos that inhabit this unique world. 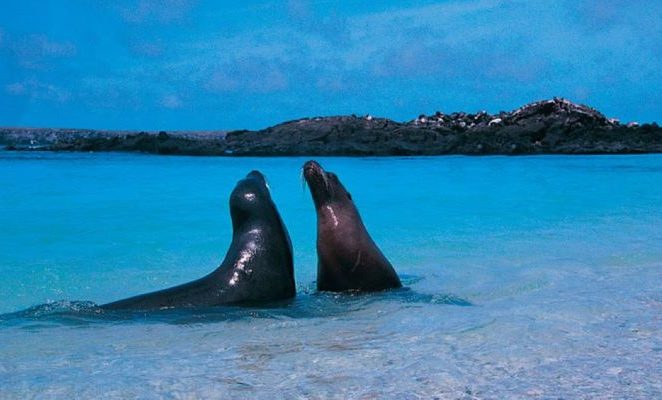 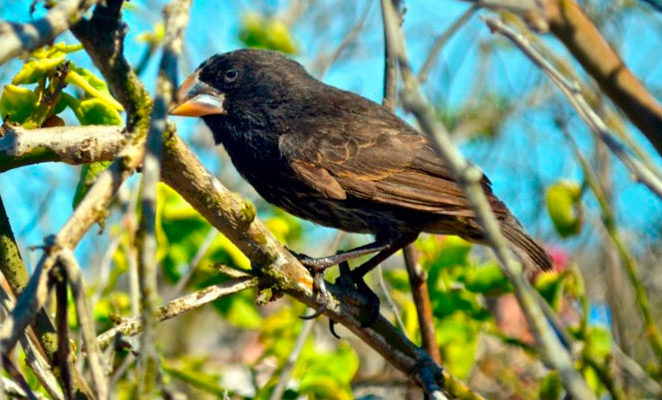 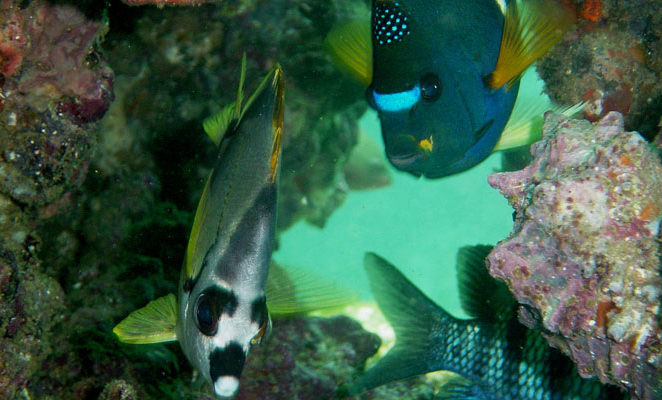 Underwater animals of the Galapagos Islands. 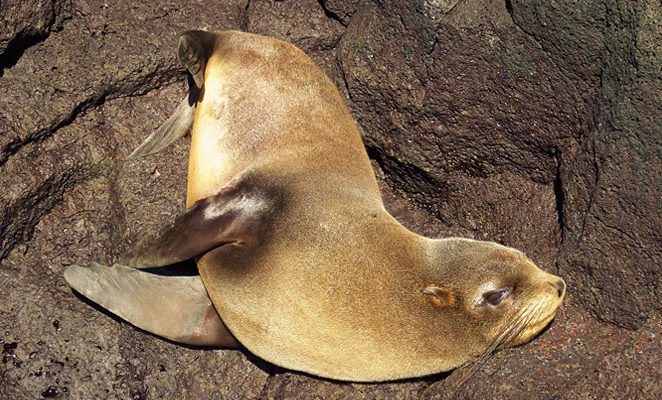 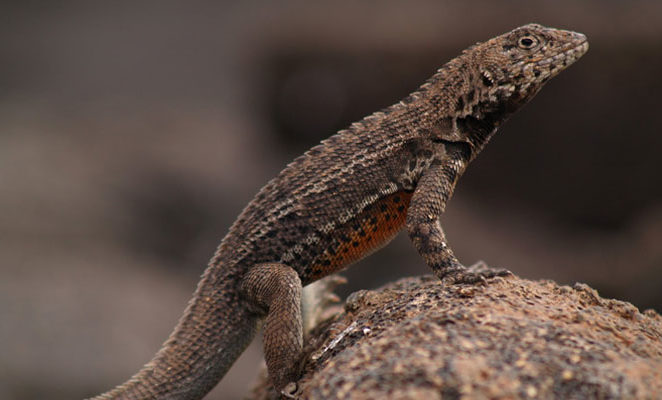 The sea lion is one of the most commonly seen Galapagos animals, often observed lounging along paths and on benches. They live in large colonies on almost every beach in the Galapagos, but generally treat visitors with vague curiosity. The sea lion is endemic to the Galapagos Islands, but is biologically similar to the California sea lion. Male sea lions are extremely territorial, and fights often break out during the mating season.

These dull, little birds may seem irrelevant, but do not underestimate the historic importance they have for the scientific community and society at large. While blue-footed boobies and giant tortoises are some of the most iconic wildlife of the Galapagos islands, it is the Darwin finch that most symbolizes Darwin’s theory of evolution. The 13 species of finch that currently inhabit the archipelago all originated from just one species that arrived to the Galapagos (geologically speaking) only a short time ago. Each of the species exhibits variations in accordance with its habitat that were just notable enough to pique Darwin’s interest. The most evident difference lies in the size and shape of their beaks, but it is next to impossible to distinguish each of the birds in their natural habitat – even experts struggle with the task. The best locations to observe these birds are on Santa Cruz, Española, Genovesa and Isabela islands.

Underwater Wildlife of the Galapagos

The Galapagos Archipelago is a world-renowned diving and cruise destination for good reason. Dazzled by the spectacular life above water, visitors often forget about the wonders that live just offshore. The waters that surround the Galapagos are home to a breathtaking range of creatures, and divers can swim amongst penguins, shoals of tropical fish, hammerhead sharks, green sea turtles, marine iguanas and whale sharks, while over a dozen species of cetaceans can be spotted above deck. The beautiful diversity of the marine life has granted the Galapagos Marine Reserve the title as one of the largest in the world. Leading diving/snorkeling sites are: Champion Islet, North Seymour, Punta Espinoza, Gardner Bay, Genovesa, Bartolome, Rabida, Punta Vicente Roca and Sombrero Chino.

While the blue-footed booby is the most famous, the list of wildlife of the Galapagos actually includes three species of booby bird, with the red-footed and Nazca booby also joining in on the fun. Boobies have adapted excellently to surviving in the same environment while avoiding competition, each one feeding at a different ocean depth. Likewise they have developed different breeding locations and nesting areas, with the red-footed booby (despite its webbed feet) even nesting in the branches of small trees and bushes. The booby birds have also developed a rather peculiar mating ritual, particularly the blue-footed booby as it struts around, sticking its feet into the air in clownish movements. The blue-footed and red-footed boobies can be recognized by their feet, which are blue and red respectively. The masked booby, on the other hand, is primarily black and white, with a black shading around its eyes and beak, as if it were wearing a mask. Blue-footed birds can be seen on Española and North Seymour, while red-footed are best observed on Genovesa, and the masked booby on Genovesa and Española.

The Galapagos fur seal very closely resembles the Galapagos sea lion, and like its cousin, is endemic to the archipelago. Nevertheless, looking closely, the two species can be quite easily distinguished as the fur seal is much smaller and has little ears that poke out of its head; in fact, it is the smallest eared seal in the world. The fur seal prefers shaded rocky coasts to stay cool under its thick coat. They can easily be observed on the beaches of North Seymour, Genovesa and Santiago islands.

The World’s only Ocean-Going Lizard

The unique habitat that the archipelago offers its residents (rich waters, little competition/predators) has resulted in incredibly unique wildlife of the Galapagos, the marine iguana being an excellent example. This remarkable animal, found nowhere else on earth, was once a fully terrestrial iguana, but experts believe that the lack of nutritious vegetation forced it to look for food under the waves. In order to survive in this salty marine environment, it has developed a few intriguing adaptions, including nasal glands that collect salt from its bloodstream, which it then sneezes out. The largest populations live on Fernandina and Isabela islands.

As with the Darwin finches, the giant tortoise was another Galapagos animal that caught the eye of Charles Darwin. The neck and shell of these tortoises have clearly evolved so that they can better take advantage of the environment they inhabit. In fact, these evolutionary traits vary so much between islands that the vice-governor of the Galapagos at the time told Darwin that he could tell which island a tortoise came from simply by looking at it.
On the other hand, the Galapagos giant tortoise is also well known for its tremendous size, which is a common effect of living on isolated islands. In fact, giant tortoises used to roam almost every continent on earth, but they have since been drastically reduced to just two locations: the Galapagos and Aldabra Island off the Seychelles Archipelago. In part thanks to their size, they are able to live for anywhere between 150 and 170 years. Visitors are welcome to visit the tortoises in their natural habitat in the highlands of Santa Cruz, or at the breeding and repatriation program on Isabela Island.

Many wildlife of the Galapagos have evolved specifically for life in the islands, resulting in a variety of strikingly unusual and eccentric species, and some of the best examples of this process are the flightless cormorant and Galapagos penguin, both endemic to the archipelago.
The flightless cormorant is the only flightless species of cormorant in the world; in fact its wings are three times too small to lift the weight of the bird off the ground. On the other hand, the bird has become a terrific swimmer and fisher. Galapagos cormorants can only be seen on Fernandina and Isabela islands.
The Galapagos penguin has made quite the name for itself, being the only penguin in the world to live so close to the equator, even crossing it at times. In order to survive in such warm temperatures, the penguin has several adaptations such as its small size (making it the second smallest penguin in the world). It can also be seen bent over its feet, protecting them from the hot sun with its flippers.
Don’t forget to ask your travel expert which of the most iconic species Big15 are included on your Galapagos cruise.

After learning about wildlife in Galapagos, it is very important to read here about things you should know before your trip.