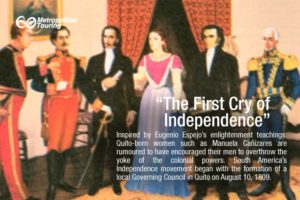 Great movements in human history rarely occur in isolation. The case of Ecuador’s long-lasting battle for independence from Spain is no exception. The American Revolution, which brought with it the independence of the United States of America (1776) and the French Revolution of 1789, as well as the Napoleonic invasion of Spain (1808), represented a rebellion against the prevailing world order of the time and motivated change in all of the Latin American colonies.
In particular, the locally-born elite of Spanish parents – the criollos – found inspiration in the Enlightenment movement which swept Europe in the 18th century, promoting hitherto unacceptable values such as liberty, progress, tolerance, fraternity, constitutional government, and the separation of church and state. It was an age of idealism, of belief that science could accomplish anything, and of dreams of taking back control of one’s own destiny as both individuals and societies. 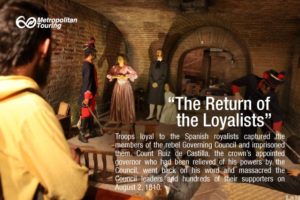 On 10th August, 1809, a group of criollos of the Quito aristocracy decided that the moment had come to take power in their own hands. They deposed the authorities of the Royal Audience of Quito, submitting Count Ruiz de Castilla to house arrest after a bloodless overthrow supported by the colonial troops. They formed the Governing Council of Quito, which officially claimed allegiance to the ousted King of Spain, Ferdinand VII.
Unfortunately for the rebels, Spanish leaders in Guayaquil, Cuenca, Lima and Bogota saw the Governing Council as an enormous threat. They did not trust the council’s declaration of allegiance to the king and set out to quash the movement with troops on land and blockades at sea. In the end, the Spanish troops prevailed and Count Ruiz de Castilla, newly restored to power, went back on his word and massacred the leaders of the rebellion on 2nd August, 2010, depriving the population of some of its most important intellectuals and thus weakening its abilities for self-governance for an entire generation. 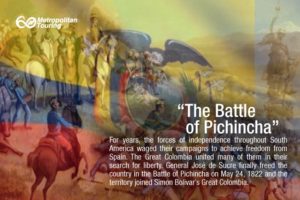 The rebellion in Quito did not enjoy immediate success, but it awakened a revolutionary fever throughout the continent, where local Spanish authorities prohibited – sometimes even upon pain of imprisonment or ex-communion – any spreading of information regarding the events in the rebellious city. The restoration of the Spanish monarchy under Ferdinand VII on 11th December, 1813 temporarily solidified the crown’s hold on its South American colonies but the spirit of independence had already taken hold among the much-repressed population of the Royal Audience of Quito. 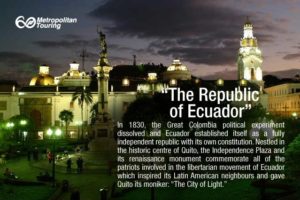 Not until 24th May, 1822 when combined forces of the Great Colombia, led by Simón Bolívar’s key deputy, General Antonio José de Sucre, defeated the colonial powers at the Battle of Pichincha, did the Department of Quito set aside Spanish control and join the Gran Colombia in a greater effort for South American independence. But the unification efforts of Bolivar (Ecuador, Colombia, and Peru) failed, and Quito separated from the Gran Colombia on 13th May, 1830. General Juan José Flores assumed the civil and military command and convoked the first Ecuadorian Congress that met in the city of Riobamba in August 1830. This first congress wrote the Constitution, which named the country Ecuador and declared Quito as its capital city.
Every year on the 10th August, the country celebrates this first “Cry for Independence” with an event known as the “Libertarian Soiree” or “Velada Libertaria” including military events, historic recreations, traditional music and other festivities designed to foster citizens’ interest in and knowledge of their national history as well as reminding the world of why Quito is considered the “Light of America.”
For more information on the history of Ecuador’s path to independence, click here

A multi-faceted artist who weaves words and notes, languages and cultures, she is a dedicated mother and a world citizen, committed to leaving the world she touches a slightly better place every day.

likethis
What's your reaction?
Useful
65%
Not useful
35%
Posted In
Blog, Ecuador
Tags
You might also like
Read More