The Galapagos Nazca Booby and the Forces of Nature

In the scientific world, the term ‘booby’ generally brings up the image of a clownish blue- or red-footed bird that waddles around the Galapagos Islands. However, this world-renowned archipelago is also home to a third species of booby (in addition to the masked booby), which looks quite different from its more colorful cousins. Learn about the Galapagos nazca booby – BIG15.

The Galapagos Nazca Booby is covered in elegant white plumage with the tips of its tail and wings painted a deep brown-black color, and a sophisticated black mask covers its eyes. In contrast, its bill is a bright orange or pinkish-orange (for males and females, respectively), although the colors vary slightly between islands. On the other hand, its feet are a blue-grey or dull olive, quite different from the red- and blue-footed boobies.

The Galapagos Nazca booby is quite a new addition to the list of official Galapagos species, as it was only discovered to be its own species in 2002 (previously considered to be the closely related masked booby). The primary difference is in their behavior and beak. The Nazca booby nests on cliffs and steep slopes, whereas the masked booby uses low, flat areas for nesting and has a significantly yellower and shallower bill. 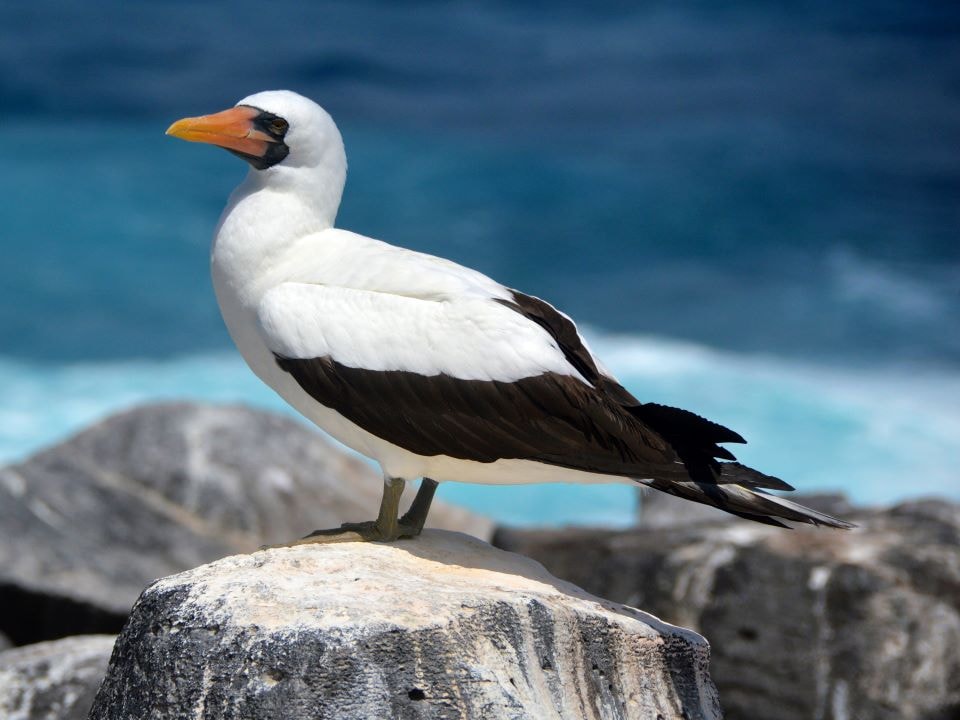 The Nazca booby is its own species of the booby family.

Unlike the majority of species in the Galapagos Islands, the Nazca booby is an annual breeder, but the time of year it breeds varies depending which island the colony lives on. For example, Genovesa Nazcas breed between August and November, whereas breeding occurs between November and February on Española Island.

Like other species of booby, Nazca boobies also participate in highly ritualized mating dances. The male initiates the dance with skypointing, in which he stretches his beak upwards, showing off his neck. If the female agrees to the courtship, she replicates the action. In addition to formalizing the courtship, the dance also determines the location of the nest. The nest of the Galapagos Nazca booby is by far the most simple of all boobies and consists of a simple ring of guana, which is cleared of any debris and typically built on the rocky ledge of a cliff. Once the eggs are laid, the parents use their large webbed feet to keep them warm, with both parents fully sharing the responsibility of parenting.

The cold truth of nature – The Galapagos Nazca Booby 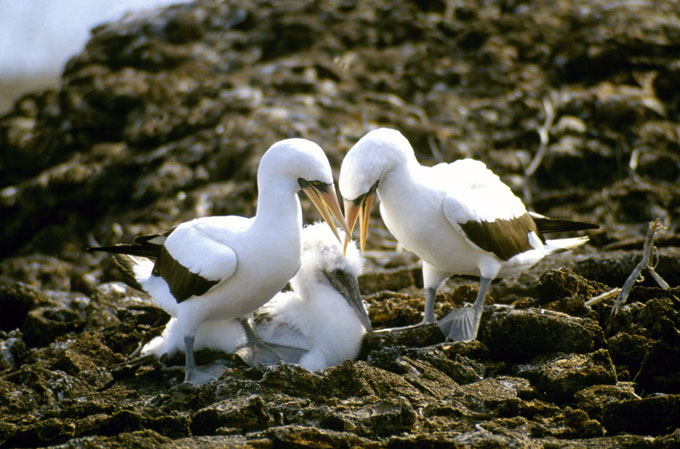 Did you know that only one Nazca booby egg survives?

Nazca boobies typically lay two eggs; however, the parents are never able to raise two young, resulting in the unfortunate event of siblicide. Females lay the first egg several days before the other (as many as nine days prior) and as such, the first egg may hatch more than a week before the second. This hatching asynchrony is the longest of all birds, and is a death sentence for the second-born. As the first chick has several days to grow before the second chick even hatches, it is significantly stronger and uses its strength to dominate the other until it pushes it out of the nest. The parents do not acknowledge the weaker chick once it is pushed out and it is left to die of temperature change, predation or starvation. The act of siblicide is performed without fail when there are two chicks and, as a result, Nazca boobies never raise two chicks, a trait specific to this species. Siblicide is a common practice among booby birds; however, not to such an extent. For example, blue-footed booby chicks perform what is referred to as facultative siblicide, only killing the weaker chick if there is not enough food. Scientists have yet to determine the reason for this relentless murdering and there are a variety of theories. Some experts believe that this siblicidal allele formed from past selection pressure, such as food scarcity, and it was never lost.

Despite the unfailing occurrence of siblicide, the female continues to use an enormous amount of energy to lay two eggs. Experts believe this is a mechanism to ensure that at least one of the chicks will survive. Nazca boobies have a surprisingly high hatching failure rate, ranging from 25 to 50%. Thus, if the first egg fails, the second egg guarantees the reproductive success of the parents. Further research is required to truly understand the high egg failure rate, but either way this and siblicide both ensure that the parents will only ever raise one chick and they are able to focus all of their efforts into its success and survival.

likethis
What's your reaction?
Useful
88%
Not useful
13%
Posted In
Galapagos, Nature and History
Tags
You might also like
Read More