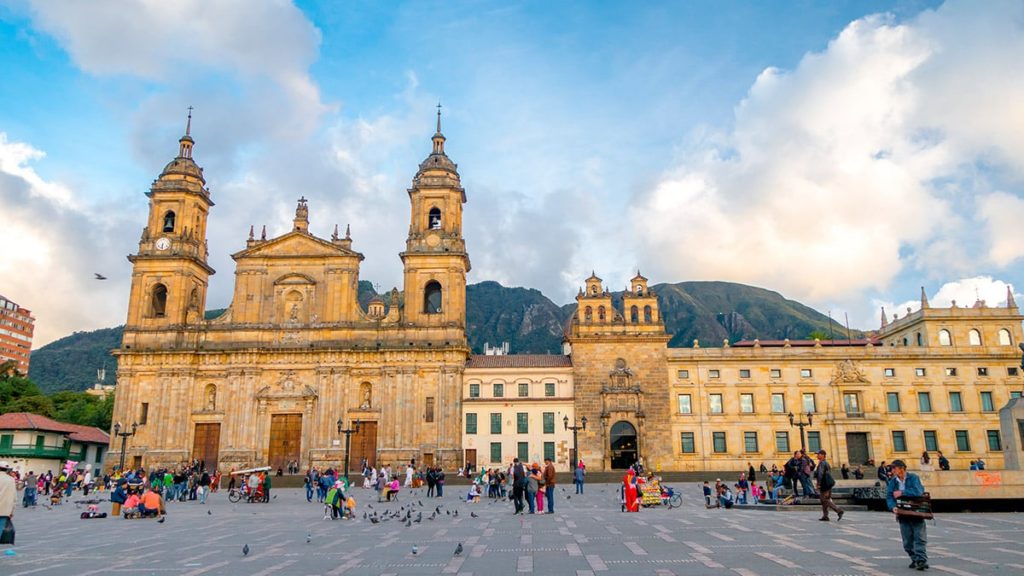 Enjoy a trip to the capital city of Colombia.

Bogotá is the capital of the Republic of Colombia and has always been the capital since it was founded by the Spanish Gonzalo Jiménez de Quesada in 1538. Bogotá is now a modern fast growing city, fuelling the economic growth of the nation, and one of Latin America’s urban highlights. The city is at altitude of approximately 2,640 m (8,660 ft) above sea level and with a population of approximately seven million.
Bogotá has a thriving nightlife, superb al fresco dining and bar culture, international shopping, all predominately located in the north of the city. However, the contemporary sits contentedly with the old. This can be experienced walking along its colonial streets of Candelaria the historical centre of Bogotá where colonial houses have been lovingly restored and the neo classical cathedral watching over Plaza de Bolivar. The modern and ancient are represented in Colombian art form from the gold artifacts exhibited in the Gold Museum to the voluptuous caricatures and sculptures at the Botero Museum. Around the outskirts of Bogotá one is able to see the likes of the Salt Cathedral of Zipaquirá; the colonial town of Villa de Leyva and the legend of El Dorado at the ceremonial lake of Guatavita. 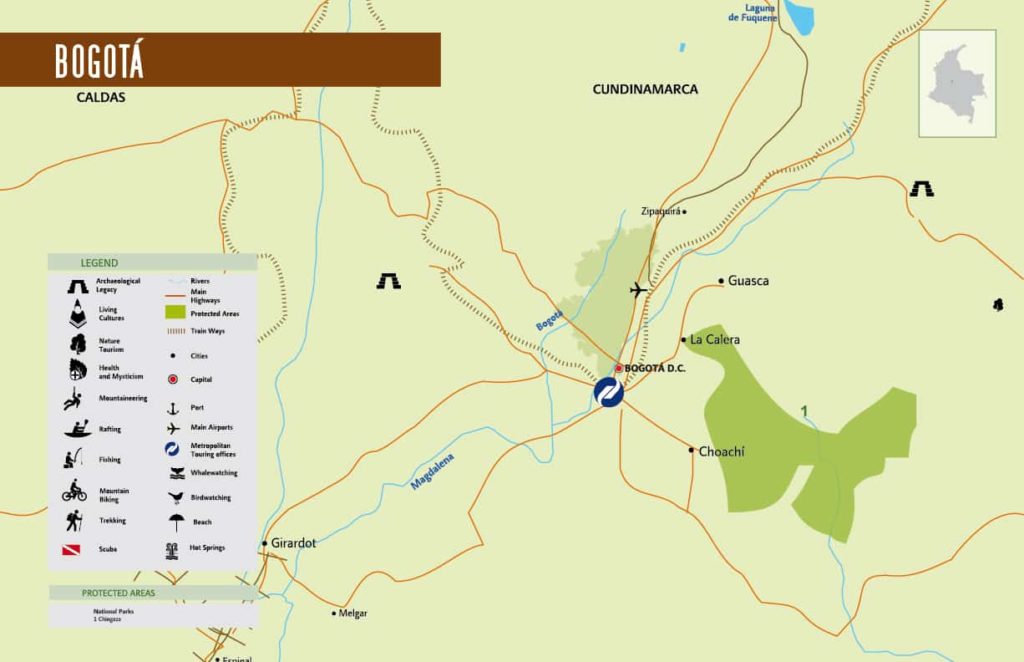 Colonial Center
Bogotá’s colonial heart lay in La Candelaria. This antiquated barrio is of great architectural and cultural heritage that exudes colonial grandeur thanks to the loving restoration of some buildings. Step back in time and walk through thick sturdy wooden doors with inlaid ironwork and view daily life from the overhanging balconies. Step into internal patios with hidden gardens and then stroll around the Plaza de Bolivar, the main square in Bogotá where the Congress Palace, the Cardinal’s Palace, the colonial church of El Sagrario, the House of Independence, the Palace of Justice and the City Hall can be seen
Gold Museum
The Gold Museum has an exhibition of some 32,000 pieces of gold work, along with collections of stones, ceramics and textiles from all major pre-Hispanic cultures in Colombia. It is arguably the most important gold museums in the world. The most treasured pieces are housed in a strong-room on the top floor. The installation is overwhelming as ancient sacred gold artefacts are systematically illuminated and the voice of an ancient people transports the mind to another time. The museum also has exhibitions displaying geographical and social aspects of both pre-Columbian and contemporary Colombia
Botero Museum
Housed in a renovated colonial mansion the works on display are all donated by Fernando Botero, Colombia’s most famous artist. Though Botero is a ‘Paisa’ from Medellín, around 120 pieces of his own work are displayed at the museum including his famous sculptures, paintings and drawings. His work is best remembered for the ‘proportionally exaggerated’ fat figures such as ‘La Gorda’ which, though initially amusing, has a voluptuous quality about them. In addition to his own work his personal collection by Picasso, Renoir, Dalí, Degas, Chagall, Matisse, Monet and Giacometti are also exhibited
Botanic Garden
The importance of flora to this country is exemplified in the form of the Botanic Gardens, also known as José Celestino Mutis Botanical Garden, named after the botanist who classified flora species in Colombia.
The gardens display a diversity of vegetation from all the regions in Colombia. Covering an area of 20 hectares the gardens serve not only to present flora in beautiful surroundings, but also to conserve species in danger of extinction. Notable flora exhibited is the biggest aquatic Amazonian flower, the Victoria Regia water lily, and the national tree, the Palma de cera. In such a fast moving city, Bogotá needs a ‘green lung’ and the Botanic Garden fulfils this task well