Why should I visit Quito, Ecuador? Here Are 12 Reasons Why

Romantic, enigmatic, mesmerizing, energetic, historic, vibrant, dynamic, cultural, friendly, breathtaking, inspiring: these are but a handful of the adjectives that could help up to sum up Quito – the capital of Ecuador – in a nutshell. However, there’s so much more to Quito that just a string of adjectives, and they’re found in the wide array of experiences, places, and moments it offers.  Here are 12 reasons to visit Quito, Ecuador:

As one of the very first UNESCO World Heritage Cities in the world (alongside Galapagos Islands), Quito is one of the Crown Jewels of Ecuador, if not South America. It’s Historic Quarter – which happens to be one of the best-preserved Old Towns in all of the Americas – is a veritable treasure chest of dozens of churches, museums, colonial-era structures, beautiful parks and walkways. Without a doubt, it is seen as one of the top, must-see places in all of Quito, Ecuador, with numerous places to visit and admire within a matter of blocks. Did you know? The Historic Center is saturated with churches due to it having once served as the Religious Hub of the entire continent!

Breakfast in Quito starts with the familiar scent of freshly baked bread wafting around every block, and thanks to the altitude, baked goods in Quito have a distinctly perfect texture and flavor. In Ecuador, as in most of Latin America, lunch or almuerzo is the most abundant meal of the day and it always features a soup; a simple consomé, a healthy quinoa soup, a creamy potato locro served with avocado; or a coastal-inspired, onion-infused fish stew like the encebollado. Then, there’s the ceviche, a tomato and onion-charged concoction like no other that usually features shrimp or fish marinated in lime juice, plus several other surprising ingredients. Finally, at the center of every dining table in Ecuador is the ají, which, if you’re a fan of hot sauce, you won’t want to miss, as each household and each restaurant has their own unique recipe. If you’re looking for the perfect souvenir, Quito is definitely the place to go! Out of the perfect combination of cultural tradition and creativity, this city is teeming with beautiful handicrafts that will always tell you a story about this city that’s cradled by mountains and its perky inhabitants. From carefully handmade jewelry and headwear to incredible knitted fabrics and otherworldly paintings, Quito has a little something in store for just about every single one of its visitors!

Ecuador has often been regarded as the home of the world’s best chocolate. As one of the world’s largest exporters of cacao, it’s no small wonder it holds this title. Visitors and chocolatiers alike from around the world never hesitate to come to Quito simply to dive into the wonderful world of Ecuador’s chocolate. As one of the country’s biggest claims to fame, visitors will be delighted to pair a good chocolate tasting with several of the fantastic views around Quito, which we’ll get into below! Put simply, the views in Quito go on for days. Whether it’s the way the clouds slither over the hillsides and mountain tops at dusk or the way the light illuminates the surrounding valleys at dawn, no visitor will walk away from Quito without a feeling of complete wonder. The best part? There are numerous ways of experiencing these remarkable views throughout the city, one of which involves taking a short journey aboard the TelefériQo (Quito’s gondola) to the top of the Pichincha Volcano. This gondola also happens to be one of the highest aerial lift in the entire world, going from 3,117 m (10,226 ft) all the way to 3,945 m (12,943 ft) above sea level! Breathtaking view of Quito at dusk.

Quito holds a pivotal spot in Ecuador, pinning the north-central region of the country that happens to be less than an hour away from the equator. As a result, the city of Quito makes for an excellent jumping-off point to visit the Galapagos Islands, the rest of the Andes mountain range, and/or the nearby tropical forests – some of which are so conveniently close to Quito that they’re actually still within its metropolitan district. The city’s airport also has direct flights to/from several major cities in the world, including but not limited to: Miami, Panama City, Madrid, Amsterdam, and Bogota.

The weather in Quito is, by all means, exciting. Sometimes, it feels like we go through every known season in just one day! In the morning, you’ll wake up to a deep blue sky crowned by a glowing sun and soft cotton-like clouds. In the afternoon, the mist starts cascading down the mountains as a refreshing drizzle (that can turn into heavy rain in a heartbeat) caresses your face. At night, after everything has cleared up, you can enjoy the chilly Andean wind as you look up to the starry sky in awe. All in all, we can assure you that no day in Quito is the same as the one before!

As focused as Quito has been in accommodating its ever-growing population, it has kept a keen eye on restoring, maintaining, and expanding its green spaces. Nature is essential to our survival and quiteños are becoming increasingly aware of this. Quito’s equivalent of Central Park is Parque La Carolina. This green space is a favorite for many residents, given its size, its athletic fields and facilities, and its relatively new aquatic area. Parque La Carolina is also home to Quito’s award-winning Botanical Garden, boasting the most impressive collection of orchids in the world. Quito’s largest city park is also one of the largest metropolitan parks in South America: Parque Metropolitano (also referred to as the “lungs of the city”) rests atop a large hill opposite Pichincha and covers an area of 560 hectares. La Carolina Park located in the heart of Quito.

Quito has one of the most unique collections of museums in Latin America. The most famous of these are the Guayasamín Museum and Chapel of Man (Capilla del Hombre), which pays homage to the work of humanist and abstract painter, Oswaldo Guayasamin. Then, there’s the renowned Contemporary Art Center or CAC. The building, located high above the city center, is an old military hospital that has been repurposed and revived with some of the most spectacular, cutting-edge exhibits by artist from all over the world. The tranquility and inspiration you feel here is like no other. Another remarkable museum is the Mindalae Ethnohistoric & Crafts Museum of Ecuador, which features originals and replicas of pre-Hispanic artifacts, offering visitors an appreciation of the cultures that existed in centuries past. La Casa del Alabado Museum is also a unique and quaint way of discovering pre-Columbian art in a restored colonial house, with all of its pieces organized and structured thematically rather than chronologically.

Markets are one of the best ways to get a true taste of what this city is all about! As soon as you set foot in one of these amazing places, endless piles of fresh fruit greet you with their sweet aroma and vivid colors. Feeling hungry? Don’t worry, the kind folks who sell this selection of exotic and wonderful fruits and vegetables are always willing to offer you a sample! A few steps away, you’ll find a mesmerizing bed of flowers, amazing bodegas packed with trinkets you never knew you needed, and seamstresses always ready to give that hole in your shirt a quick fix. Visiting a market in Quito is like being part of a fascinating carnival; you’ll never grow tired of it! Enjoy fresh vegetables and fruits in one of Quito’s most famous markets.

Without a doubt, one of Quito’s greatest treasures is its people! Quiteños are just like the mountains that surround them – they are as gentle and soothing as they are impressive and proud. The extraordinarily wide array of people you can find when visiting Quito will bring you face-to-face with some of its most distinctive personas: the joker, the storyteller, the curious one, the friendly one, and so on. Nevertheless, if there’s one thing that ties them all together (and makes them truly belong to this city), it is their infinite kindness and amazing heart. Join locals in their traditional festivities.

Quito is a city with incredibly cheap transportation options: from taxis that cost you a mere couple of dollars to take you across the city, all the way to buses that have a flat rate of 25 cents per ride. it’s also a city that’s becoming progressively green in terms of getting around, and by this we mean: there’s been a noticeable rise in the use of bikes to get around the city, with many of the city’s streets now having dedicated bike lanes. Connection between the main avenues.

At the same time that the metropolitan area of Quito has extended to a length of 40 mi (60 km) along a narrow valley at the foot of the Pichincha, the city has grown to envelop a number of neighboring valleys to the east. Add to this expansion the fact that Quito has one of the hilliest terrains in the world and you get one of the most challenging transportation equations around. For years, Quito has sought practical solutions like bridges, tunnels, flow-based redirection, and limiting which vehicles can operate during peak hours on certain days (pico y placa). It seems that none of this has been able to accommodate the growing transportation demands of the city. That is, until later this year when the city finally inaugurates the Metro, the country’s first subway system, projected to transport 377,000 daily passengers and unite the South, Center, and North areas of the city.

FOR THE HISTORICALLY-INCLINED: If you decide to come during Fiestas de Quito – a beloved local holiday that celebrates the city’s independence – you will find the capital alive with party and music. It’s a celebration that brings together native and Spanish traditions, resulting in the famous holiday of Ecuador’s capital.

likethis
What's your reaction?
Useful
90%
Not useful
10%
Posted In
Experience, Trending
Tags
You might also like
Read More 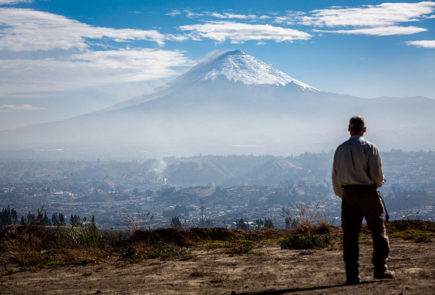