Things You Can’t Miss Out On in Ecuador

Ecuador is the fourth-smallest country in South America with an area of 283,560 km2 (109,480 mi2). Yet its small size hides some of the most beautiful spots found within the continent and many secrets waiting to be discovered. Ecuador is divided into four regions and it is the country with the greatest level of biodiversity per square kilometer in the world. On top of that, Ecuadorian history and culture are a summary of the heritage that belongs to the South American continent. This includes the Spanish conquest which shaped its idiosyncrasy and made it the beautiful “mestizo” country that it is today. If that isn’t enough, Ecuador is also home to three World Heritage Sites. The first is Quito’s beautiful colonial downtown, which is the best-preserved and least altered historical quarter in all of Latin America. The second is the Galapagos archipelago, also known as the place that inspired Charles Darwin’s Theory of Evolution. The last is Ecuador’s third-largest city, Cuenca, which is also a classical example of the Spanish style colonies that were established in South America. Below you will find a list of some of Ecuador’s most iconic spots that you can’t miss out and that will give a very comprehensive view of what Ecuador has to offer. But be warned, you may just fall in love with this tiny yet fascinating country. As they say, good things come in small packages.

There is no talking about the beauties Ecuador has to offer without mentioning this magical place. The archipelago was first discovered by the Bishop of Panama, Fray Tomas de Berlanga, in 1535 – almost 50 years after the discovery of the Americas by Christopher Columbus. Yet it became known around the world after the naturalist, biologist and geologist Charles Darwin visited and pointed out its uniqueness and importance in the understanding of the evolution of living things. 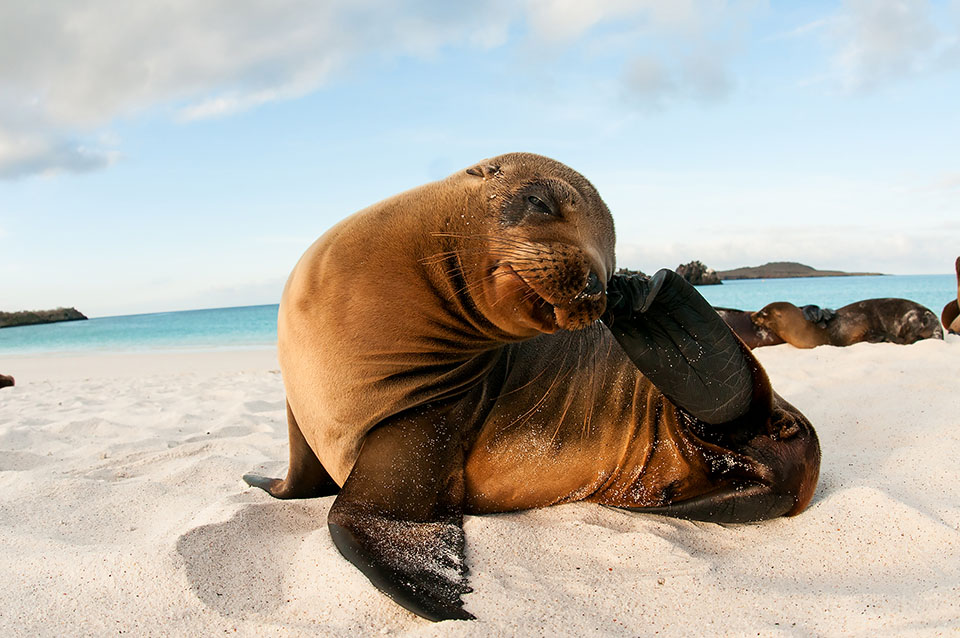 Galapagos is one of a kind place!

If you are unsure about how you should visit the Galapagos, read the following blog where you will find maps, tips and very useful explanations on the best way to get the most complete Galapagos experience.  Make sure you get to see some of the islands’ most iconic species, like the famous Galapagos giant tortoises, flightless cormorants, Galapagos penguins, great and magnificent frigates, blue-footed boobies, red-footed boobies, Nazca boobies, finches, marine iguanas, and their gorgeous land cousins, among many other species that can only be seen in the archipelago and nowhere else in the world. A Galapagos cruise is probably the best option if you are looking to get outside of your comfort zone and see some of the islands’ most iconic and remote landscapes and wildlife. 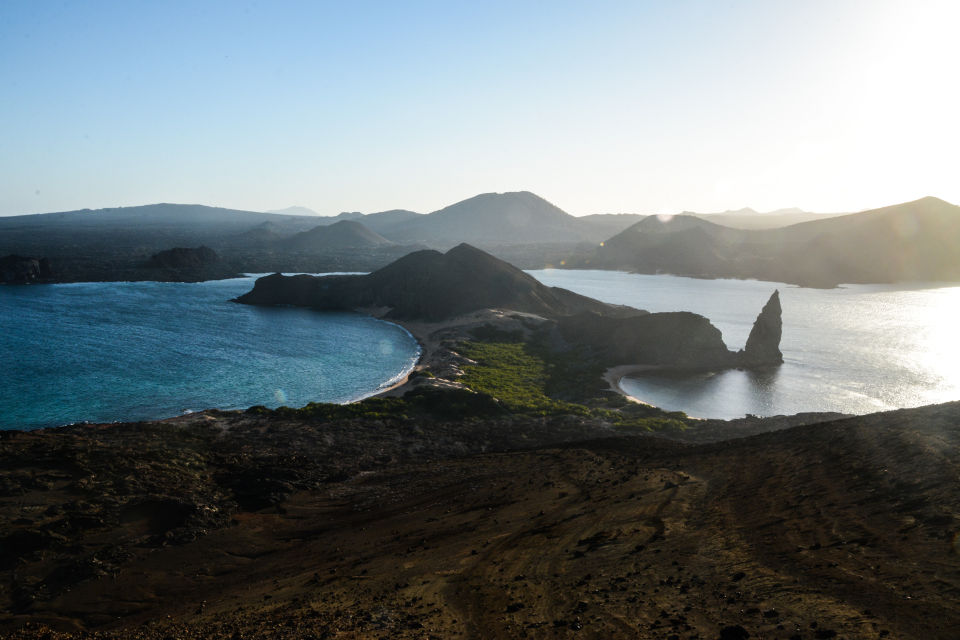 Things you can’t miss out in Ecuador: Pinnacle Rock in Galapagos.

On the other hand, if you are not all that much into travelling by sea, a land option – like Finch Bay Galapagos Hotel – might suit you best. This latter option allows you to get a little closer to the life of the Galapagos islanders while still giving you the chance to experience many of the beauties found here. If you are traveling solo or with family and friends, you will find the Galapagos have options for you. Boredom is not a word that is typically found in Galapagos lexicon.

If you are travelling to the Galapagos, you might want to consider stopping by the country’s fascinating capital. The city expands in the lower slopes and valleys of the two Pichincha volcanoes: Guagua Pichincha and Rucu Pichincha (meaning the kid and the father, respectively). The northern side of the city is home to its more modern neighbourhoods and financial institutions. The south was a result of a growth outburst during the year 2000 crisis that forced many people living in the country’s rural areas to move to the capital in search of opportunities. In between these two areas you will find Quito’s old town, crowned by the only neo-gothic church in South America – The Basilica of the National Vow – and the Panecillo Virgin. 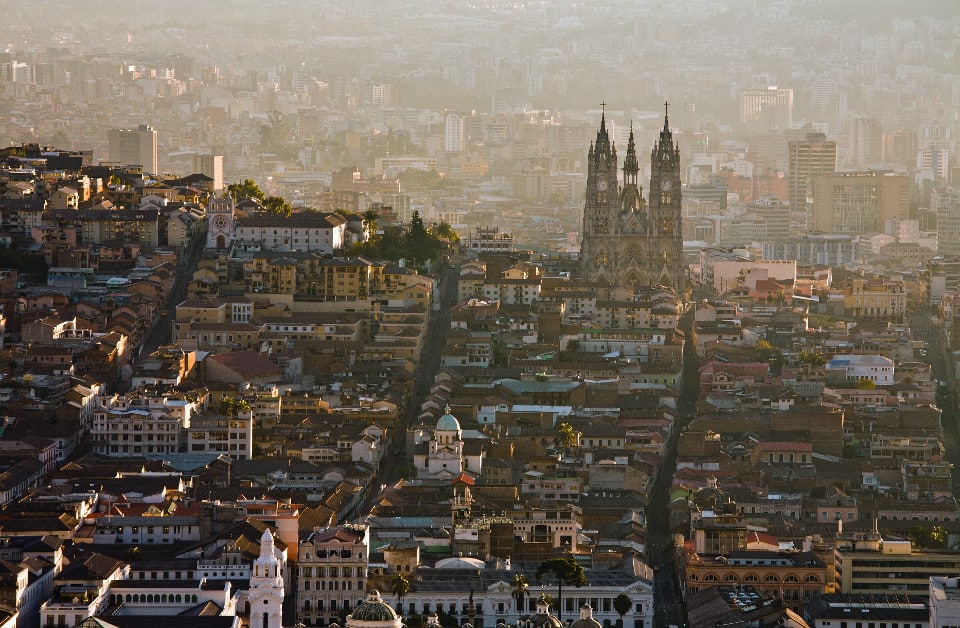 During your visit in Quito, make sure you stay downtown in order to get the closest, most intimate experience ever. We recommend Casa Gangotena – a luxury hotel that is the remodelled Gangotena family mansion – located in the heart of downtown. The hotel is found in front of South America’s biggest religious compound – the San Francisco church and monastery. Visit its many colonial churches, and visit the heart-stopping La Compañia church. Get ready to be blown away by its gold-leaf covered walls and intricate Mozarabic decorations. Continue on to discover the many museums, bohemian streets and visitor sites that make Quito a city that you will absolutely love.

Breathtaking La Compañia church on the inside.

While visiting the Andean region try and visit some of Quito’s surrounding majestic mountains, like the Ilinizas and Cotopaxi volcanoes, both of which are situated in the Cotopaxi province. While there make sure you try their famous chugchucaras. If it is Ecuadorian tropical and Andean ingredients that interest you, head to any local market to find the most colourful variety of fruits and vegetables. We also recommend you taste the world’s best chocolate that just so happens to be Ecuadorian. Your palate deserves a vacation too, doesn’t it? And believe us, the amazing flavours will remain as the most delicious part of your Ecuadorian memories.

The Secrets of the Cloud Forest

Located in the Metropolitan District of Quito, the Ecuadorian cloud forest is part of the Chocó biodiverse region that runs from Panama to the northernmost corner of Peru. It is also one of the world’s hotspots and it covers the western flank of the Ecuadorian Andes all the way to the coast. Very similar to the Amazon, which covers all of the eastern part of the country, the cloud forest is one of the rainiest regions of the world. However, it shows greater contrast in its topography as well as other geological, botanical, and hydrological differences that each make for a unique world of wildlife and nature. Because getting to the amazon rainforest (known as Oriente in Ecuador) can have its logistical difficulties, visiting the Mashpi private reserve in the Choco region is the best option. Located right in the heart of the reserve itself, Mashpi Lodge is the perfect setting to start the exploration of this 12,000 hectare (3,000 acre) piece of pristine forest filled with waterfalls, rivers and life. Go for a walk and feel transformed by the healing powers of nature in its purest form. There are only 26 biodiversity hotspots in the world and Ecuador is one of them. If you are a birdwatcher, keep in mind this small piece of forest is home to more than 400 species of birds, so have your binoculars at the ready! 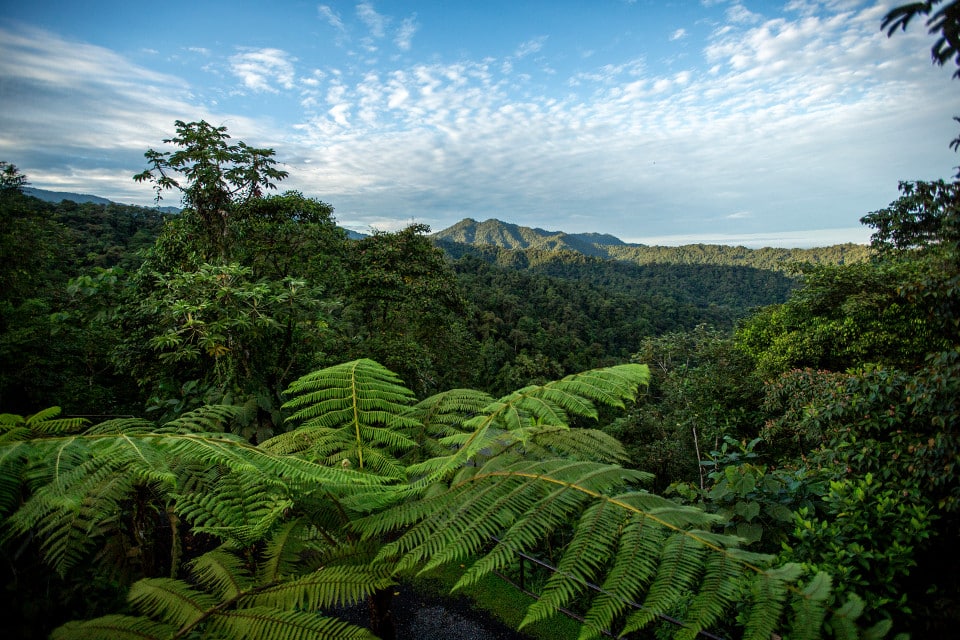 The Pearl of the Pacific

All flights going to the Galapagos have an obligatory stop in Guayaquil, the most important city of the coastal region. Usually, planes just make a 30-minute stop in this city to pick up passengers going to the archipelago. However, if you have time in your agenda, you might want to consider stopping there for a couple of days to enjoy what Guayaquil – also known as the Pearl of the Pacific – has to offer. This vibrant city has a feel to it that charms its visitors. Maybe it’s the tropical, 26° Celsius weather that invites its inhabitants to wander its streets at all hours, or the humidity that makes everything move with a different pace. This river city will certainly give you a different taste from what the Andes have to offer; from its music, to the accent of its people, to the food, to the landscapes. When on your way to your hotel, make sure you stop for a bolon de verde (green plantain with pork and cheese in the shape of a small ball) at famous Café de Tere. Head to the city’s downtown, and walk around its plazas and famous boardwalk. If you get a little lost, don’t worry, it will give you the chance to ask for directions and get to know a little more about the guayaquileño way of being, which is lively, energetic and courteous. 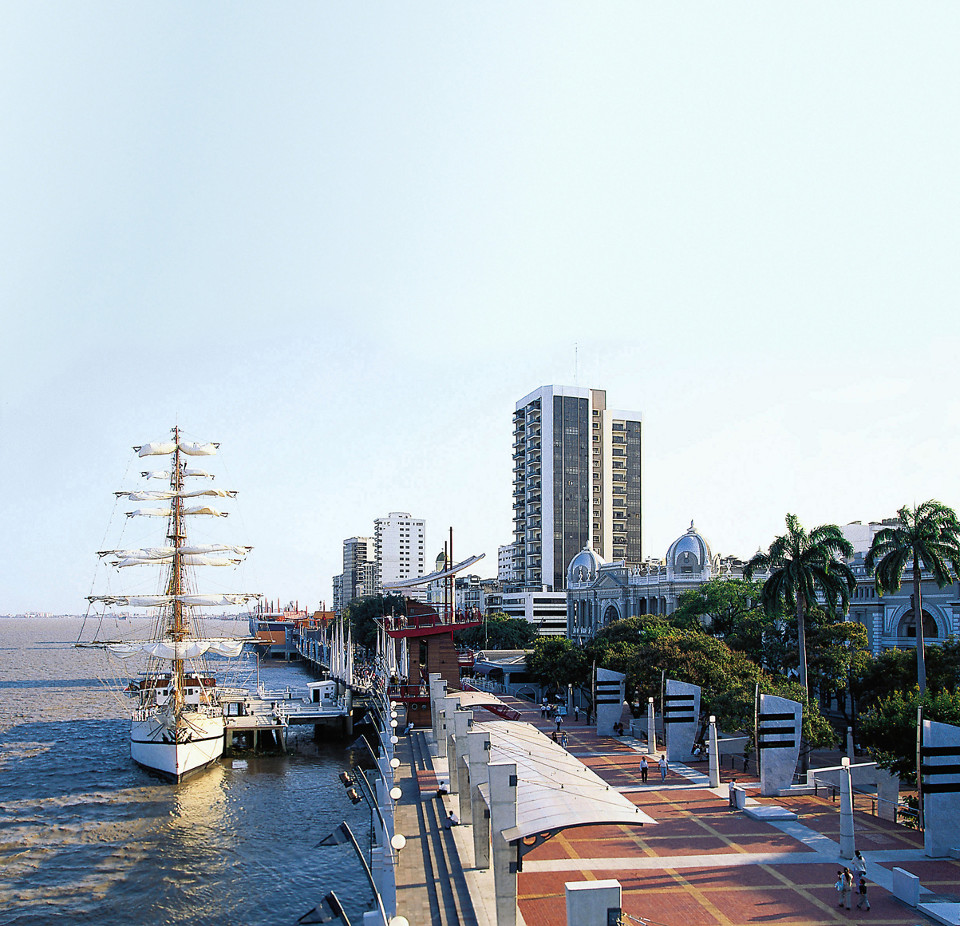 This is exactly what makes Ecuador so rich: the way in which everything changes from one region to the next, despite being such a small country. The way its people interact, the way they talk, the ingredients they prepare their delicious dishes with, the clothes they wear, the weather and biodiversity, the wildlife, the vegetation, the celebrations and holidays. These dramatic changes are what make Ecuador such an intense, colourful and beautiful land. So take the opportunity to visit this breathtaking, culturally-rich and unique nation! It’s like nothing you’ve ever seen. 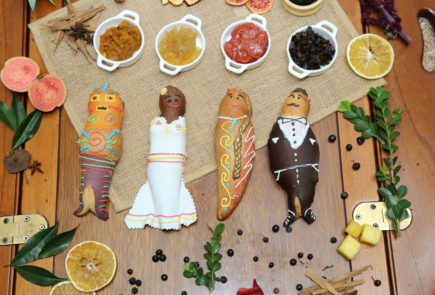