The Brightest Flamingo in the World found among Cacti

The Galapagos Islands are known to be extremely unrepresentative of your typical tropical island, with cacti and penguins living just a few miles apart. However, they are also known to be full of surprises, and the presence of the Galapagos flamingo is no exception. The Galapagos flamingo, also known as the American flamingo, is typically found in Central America and around the Caribbean, but is certainly a welcome addition to the islands. The beauty of flamingos has been celebrated by multiple civilizations over centuries of culture. For example, the Egyptians represented their god Ra in the form of a flamingo, and the Moche culture of Peru is also thought to have worshipped flamingos, whereas in ancient Rome, flamingo tongues were considered a delicacy. Where can you find the brightest flamingo in the world? 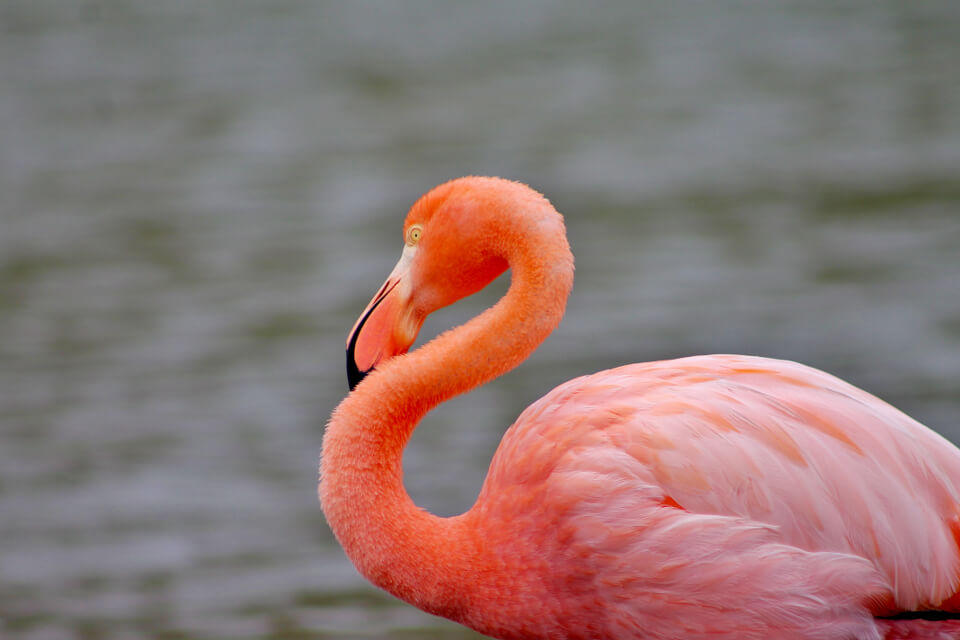 Flamingos are one of the most iconic species in the Galapagos Islands.

The flamingo – the avian outcast

Flamingos are unique birds not just physically, but also genetically. The evolutionary history of flamingos is still not properly understood by scientists, and there are enormous holes in our understanding of the bird. Evidence shows us that the flamingo evolved at least 30 million years ago, and we know through DNA that they are related to some forms of geese and duck. Furthermore, experts recently discovered that they are related to the Columbea group (doves, sandgrouses, mesites). Nevertheless, their unusually long, skinny legs, bulky beak and spectacular pink color clearly distinguish them from both of these groups, leaving scientists unable to explain how they came to be.
The longs legs and large beak of a flamingo that so clearly distinguish it from any proven relative are an extremely important part of its feeding behavior. The long legs allow the bird to easily wade into shallow pools or deep water, as well as deep mud, while its beak consists of a complex and extremely efficient filtering system that functions upside-down. Bending their necks downwards, they place their head beneath the water and filter nutrients through a system similar to that of baleen whales, lined with hairy filaments known as lamellae. This system filters the brine shrimp and plankton that they eat from the silt, mud and water they take in.
This diet is almost entirely responsible for their fantastic bright color. The shrimp they consume contains carotenoids, which break down into readily active pigments thanks to live enzymes that interact during digestion. It is because of this that the intensity of the color of the flamingo varies depending on where it lives and how many carotenoids it consumes. Interestingly enough, the one found in the Galapagos is thought to be the brightest flamingo in the world.

So what’s it the brightest flamingo in the world doing in the Galapagos?

The flamingo is more commonly found around the Caribbean, Belize and the Caribbean side of Mexico, and in fact it is rather a recent addition to the Galapagos family. However, experts have determined that it is already showing geographical isolation that slightly distinguishes it from American flamingoes found elsewhere in the world, which is why it is referred to as the Galapagos flamingo instead of the American flamingo. There are only around 400 individuals in the Galapagos Archipelago, and they may be observed wading into the lagoons that dot the shorelines, such as at Laguna Salinas on Isabela, Garrapatero Beach on Santa Cruz, as well as on Floreana Island and North Seymour Island. 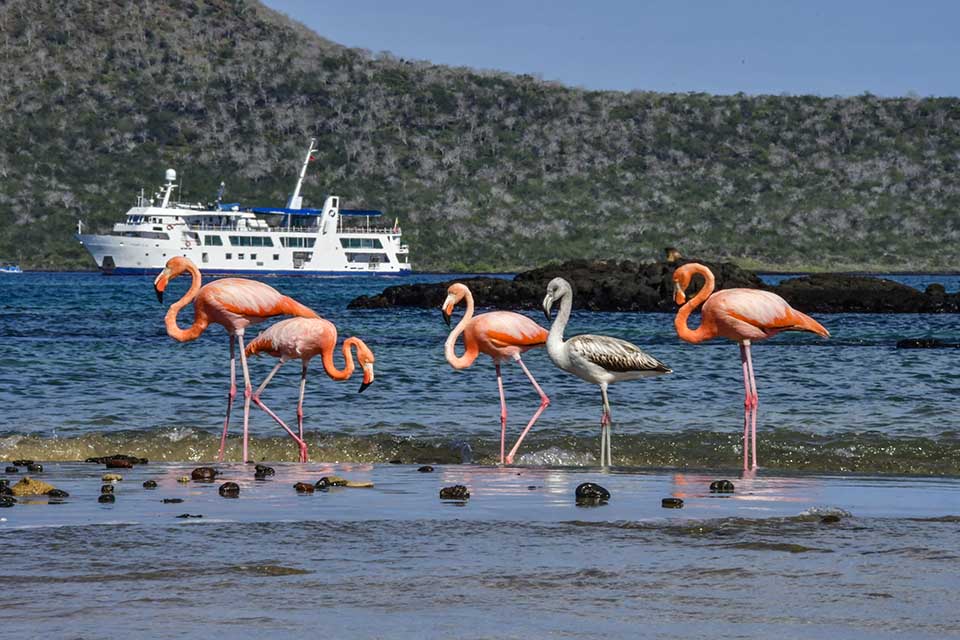 Group of Flamingos spotted in the beach.