First things first: the Spanish influence on Fiestas de Quito is a direct one by being the ones who instigated it back in 1534! That’s right, the Spanish directly founded Quito, and Fiestas de Quito is a grand homage to this historic achievement. In this blog, we take a look at what exactly the city of Quito has integrated into its celebrations that directly reflect the influence of Spanish culture on the festivities. It was as early as 1575 that shades of Spain began to appear int the celebrations held around Quito, the first of which was “sugarcane jousting,” where individuals on horses would use sugarcane as toy spears and attempt to attack individuals on the ground that donned play shields. Later on, a more pure form of Spanish culture would manifest itself in quiteño culture in the form of…

According to history, the first recorded bullfight in Quito dates back to the 28th May, 1594. The first bull cattle brought to the American continent and Ecuador by religious groups like the Jesuits and Dominicans in the 16th century, had the purpose of protecting cow cattle and crops. Apparently, the first bullfights took place 39 years after Quito’s Spanish foundation. However, it wasn’t until the year 1898 that a traditional Spanish bullfight would take place, with 6 bulls and some famous bullfighters of the time. Quito has had four bullfighting rings, of which two remain and are used even know: Plaza Belmonte and Plaza de Toros Arenas. Bullfighting was a common “Fiestas de Quito” tradition, setting the mood in the rest of the city. However, after a referendum in the year 2011, Quito voted to ban the killing of the bull during the bullfight, which lead to the cancellation of the bullfighting all together. Nowadays, they hold smaller bullfights outside of Quito, where it’s still allowed to kill the bull. Many quiteños believe, that ever since the bullfight tradition is gone, the city doesn’t feel as festive as it once did.

During Fiestas de Quito, men are traditionally seen wearing a white shirt with some sort of combination of jeans or light-coloured pants. They may sometimes even choose to complement this look with a “manton” or a large, blanket-like bandana that’s embroidered with flower designs. Such use of distinctive clothing is seen more with men than women, the latter of which will much less often be seen wearing traditional, ballgown-style dresses (with a Spanish touch) over in historical places like La Ronda alley. Note: as part of the touristic attraction, certain women actors will dress like this throughout the year at La Ronda.

Parties and dances happen all around time, and it is not uncommon at all many points during the night, traditional Spanish music will be heard, called flamenco and sevillanas. Many girls in Quito, specially from the upper classes love embracing this heritage and take Spanish dancing classes. However, many other’s don’t, and that doesn’t stop them from partaking in the traditional Spanish dance. No matter how much Spanish heritage we might have in our blood, everyone loves to dance to Spanish music!

Another one of the most iconic features to see people wearing along with their white attire is the Spanish wineskin or “bota bag.” This accessory is not merely aesthetic, as quiteños use it to drink their favourite harvest of wine from, especially at the bullfights themselves.

While visiting Quito, find out what the Spanish influence on Fiestas de Quito is all about by staying at the colonial, downtown and best-located hotel, Casa Gangotena! Admire the parties from its beautiful terrace facing the impressive Plaza San Francisco, or out on your “manton”, have a sip of wine from a wineskin and get in the Fiestas de Quito mood. 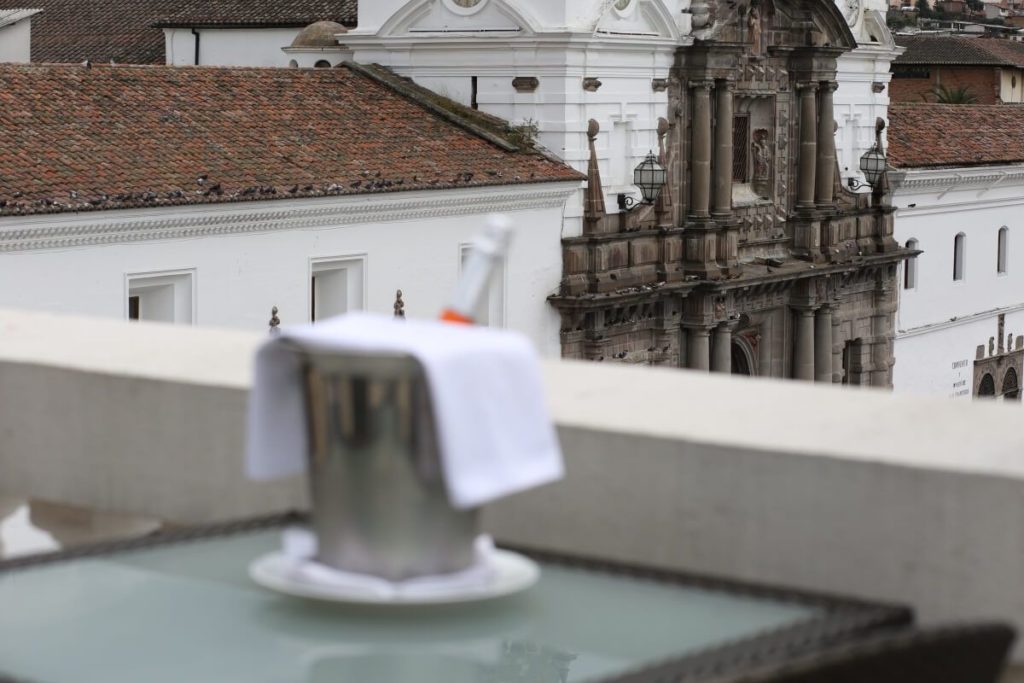 Enjoy a glass of wine with this impressive view of downtown Quito.