Northern Peru, surrounded by carob tree forests, sand and the sea, constitute the perfect setting to discover the impressive legacy of its inhabitants. This land of great cultures is full of skilled potters, impressive buildings, traditions and exquisite food, a collection of wonders that will make your visit an unforgettable experience. 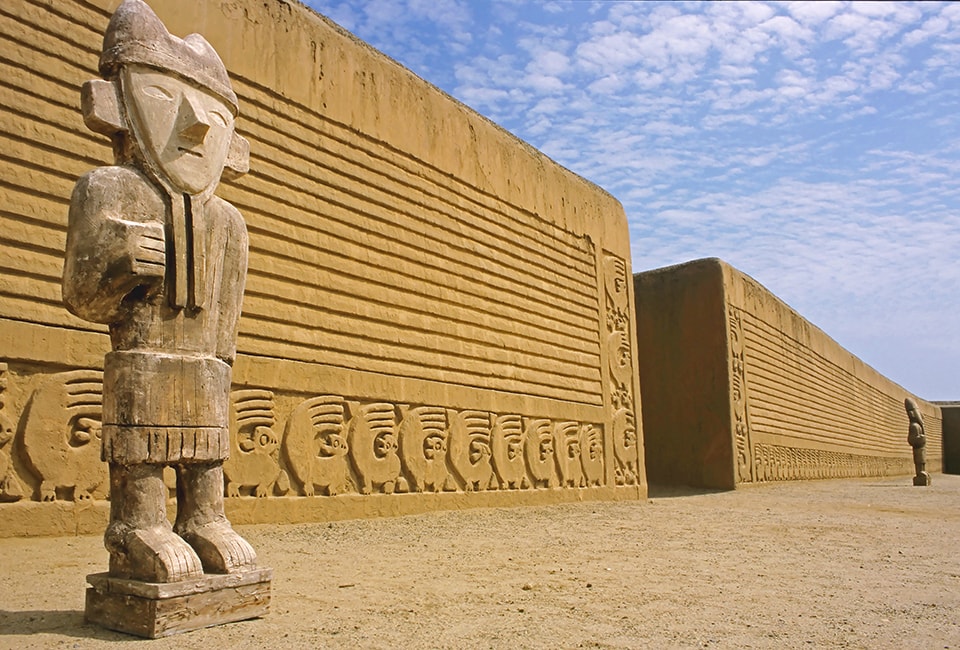 Discover this unique city in Peru.

Transfer Airport / Hotel (private)
Upon arrival in Trujillo early in the morning, you will be met by our representative and private driver and will be transferred to your hotel. Our representative will assist you with check-in procedures.
Full day Huaca de la Luna (Moon Pyramid), Huanchaco Beach and Chan-Chan Citadel (private)
Today you will head to the Moche Valley, where you will be met by a traditional family that descends from the ancient people who built the amazing Sun and Moon Pyramids, the center of power in the northern coast of Peru during Moche times.
Here you will be able to observe the undeniable traces of their monuments, be impressed by a stunning set of mud-brick friezes on the walls of the Temple of the Moon excavated by archaeologist and appreciate several artifacts and tombs of the Mochica Culture at the on-site museum Huacas de Moche displaying various utensils and high artistic ceramics
Then, take some time to enjoy the taste of the local cuisine that will reveal thousands of years of culinary tradition (lunch is on your own).
After lunch, head to Arco Iris Temple (or Huaca Dragon) from the Chimu Culture and then reach the archeological complex of Chan-Chan located 6 Kms. (3.7 miles) northeast of Trujillo and home to 100,000 habitants who stubbornly resisted the expansion of the Inca Empire. Chan Chan is a majestic citadel built hundreds of years ago, by the skilled hands of hundreds of men. It was declared a World Patrimony by the UNESCO in 1986. The archaeological remains of Chan-Chan, are rather well preserved although built with mud bricks.
Continue to Huanchaco Beach, a traditional cove, whose inhabitants still maintain some customs inherited from their ancestors, like the Caballitos de Totora (totora horses), reed boats used by local fishermen. This tradition dates back more than 3,000 years ago.
After the excursion, you will be transferred to your hotel. Overnight in Trujillo.

Full day Trujillo City Tour, then continue to Chiclayo including an en-route visit to El Brujo Complex (private)
Today visit begins with the city tour of one of the most beautiful colonial towns of Northern Peru: Trujillo, founded in 1534. Walk through its streets full of mansions and architectonic masterpieces expressed in the diverse style of construction, neoclassical and rococo, among others. Marvel at the well-preserved and imposing portals, balconies and churches.
Then visit the Archaeological Museum of Universidad Nacional de Trujillo for an overview of the region’s pre-Columbian cultures.
Lunch will be served at a local restaurant in Pacasmayo (set menu)
After lunch, continue to Chiclayo and on the way, stop to visit the Archaeological Complex of El Brujo, once one of the most important religious and political centers of the Moche Culture (100 - 750 AD). El Brujo pyramid rises about 98 feet above the surrounding desert and covers an area of roughly 330 by 330 feet. It was built with tens of thousands of adobe bricks and the walls are covered with polychrome reliefs that show war motifs, goods, animals, plants and net-fishing. Just some years ago, a well preserved tattooed mummy of a young woman, who belongs to the Moche Royalty, was been discovered deep inside El Brujo pyramid. She has been called Señora de Cao and is exhibited in the Lady of Cao Museum.
Upon arrival to Chiclayo, you will be transferred to your hotel. Overnight in Chiclayo

Full day Sican National Museum, Pomac Forest Sanctuary and Tucume Pyramids including lunch (private) [Sican National Museum is closed on Mondays]
At the appropriate time, begin today’s excursion with a visit to the Sican National Museum, located in Ferreñafe, about 25 minutes from the city of Chiclayo. Here, a door will be open to the knowledge of the lifestyle of the ancient people who made of the dry forest a strategic point for developing one of the most important cultures of northern Peru: Sicán, also known as Lambayeque. The museum exhibits aspects of daily life of the Sican culture, including pottery making and metal crafts. In addition, the Sican Museum has an interesting display of the tombs of the Sican nobility.
Continue to the Historical Sanctuary of the Pomac Forest Bosque de Pomac, located 35 km north of Chiclayo, stands imposing and vigorous, being the oldest and best preserved equatorial dry forest of 5,887.38 ha. This incredible vast forest of Algarrobo trees, an icon of veneration for the local populations guardians of myths and legends created around this tree, on the old grounds of the Batan Grande sugar cane hacienda, is dotted with dozens of ancient pyramids belonging to the Sican culture, descendants of the Moche.
Not to be confused with the similarly named archaeological site of Sipán, the Sicán were an ancient civilization that developed in northern Peru between 800 and 1300 AD. The site was first excavated in 1978 by the Japanese archaeologist and anthropologist Izumi Shimada, but it wasn’t until 1992 that his team discovered a tomb of an elite member of Sican society. From this grave, 1.2 tons of precious metals in the form of jewelry and religious artifacts were removed, now stored in the National Sican Museum.
End your day with a visit to Tucume and the Valley of the Pyramids and 26 religious groups spread on 220 hectares. Tucume is the biggest Archaeological Opencast Complex in the world, in the middle of an arid desert with a beautiful dry forest.
After the excursion, return to your hotel. Overnight in Chiclayo

Full day Huaca Rajada and Royal Tombs National Museum (private) [Royal Tombs National Museum is closed on Mondays]
Morning excursion to the magnificent mud-brick burial platform of Huaca Rajada where the world-famous Tomb of the Lord of Sipan was discovered. Admire fabulous gold artifacts, precious stones and the ancient Moche civilization’s history.
The Lord of Sipan was a member of the Moche dynasty and the archaeologists have tried to find out who he was exactly and per recent excavations, it seems like this man was the fourth character in the hierarchy.
Our next point will be Lambayeque, where a delicious meal will be awaiting us.
Afterwards, visit the Tumbas Reales Museum and discover its historical richness. The Museum is listed as the most modern in Latin America and one of the ten best in the world. The Royal Tombs Museum shelters real gems of Mochica art and keeps the remains of the old dignitary of Sipan.
Finally, you will be transferred to the Chiclayo Airport to board your flight back to Lima.

End of our Services

The Itinerary does not include: