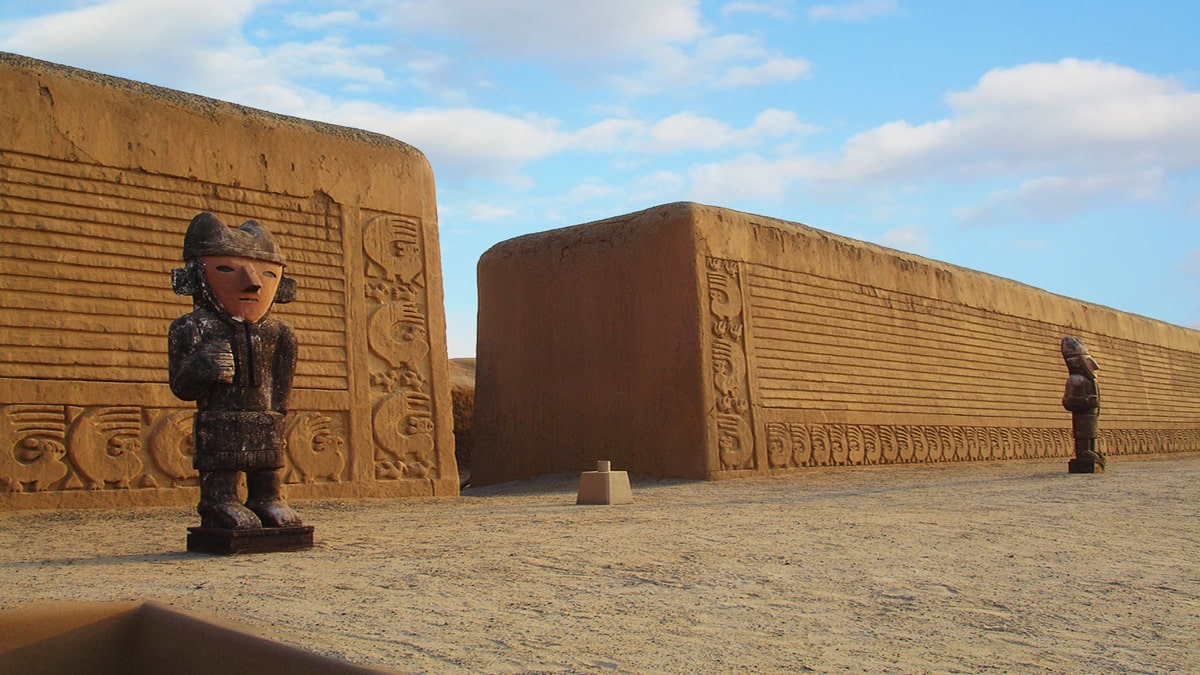 Early in the morning, arrival in Trujillo, you will be met by our representative and transferred to the Hotel in Trujillo.
Full day excursion in Trujillo: We will start our visit with the archaeological complex of Huaca de la Luna, residence and administration centre of the Moche Kingdom, an ancient pre-Columbian civilization that blossomed in the region for more than 700 years. We will observe the undeniable traces of their monuments expressed in their buildings in a landscape marked with the imposing Cerro Blanco, the vegetation that grows by the river Moche and proximity to the sea. Both Huaca de la Luna and Huaca del Sol were the centre of the Mochica’s power, a people that expan ded between 100 and 900 years after Christ.
Then, we will take some time to enjoy the taste of the local cuisine that will reveal us thousand years of culinary tradition (lunch on your own).
After lunch, we will go to Huanchaco, a traditional cove whose inhabitants still maintain some customs inherited from their ancestors, the Mochicas, like the totora horses (“caballitos de totora”), some small reed boats they use to surf on the waves. This tradition dates back from more 3000 years ago.
Our next item will be Chan Chan (from Muchik Jang-Jang, "sun-sun"), which is the largest pre-Columbian adobe city built in the northern coast of Peru by the Chimu culture. Chan Chan is a majestic citadel built hundreds of years ago by the skilled hands of hundreds of men. It was declared a World Patrimony by the UNESCO in 1986.
Overnight in Trujillo.

We will start with a city tour of one of the most beautiful colonial town of northern Peru: Trujillo, founded in 1534. We will walk through its streets full of mansions and architectonic masterpieces expressed in the diverse style of construction: the neoclassical and rococo styles among others.
After, we will continue our visit with the archaeological complex El Brujo was one of the most important religious and political centers of the Moche culture (100 - 750 AD) as well as some of the most beautiful pyramids they built in the Chicama Valley. Offering visitors one of the best exhibitions of mural art of this culture, as most of its walls and walls are decorated with high relief representations using different colors. (Half Day)
Lunch in Pacasmayo City.
Transfer to Chiclayo and overnight stay.

At the appropriate time we will began our journey with the Sican National Museum, a place that will allow us to open the door to the knowledge of the lifestyle of the ancient people who made of the dry forest a strategic point for developing one of the most important cultures of northern Peru: Sicán, also known as Lambayeque.
The next point to know will be the Historical Sanctuary of the Forest of Pomac that in the light of the archaeological and wildlife research conducted during the past years, can only confirm the mystical and sacred source of dry forest. It stands imposing and vigorous, being the oldest and best preserved equatorial dry forest of 5,887.38 ha.
The Forest of Pomac not only conserve species of endemic flowers and wildlife but also the highest concentration of Temples-Mausoleum of the Sicán Cultural Core of Lambayeque, Hispanic culture to which we owe the world identification of the sacred gold of the ancient Peru; such as ceremonial knives called "Tumi" and the magnificent funerary masks, masks of Winged Eyes.
Precisely on this particular place, we will start our visit knowing “the millenary tree”, of hundreds of years, being an icon of veneration for the local populations, who are the guardians of Myths and legends created around this particular tree.
We will continue the visit with the Point of view of the Salinas, a place that will allow us to appreciate a panoramic view of the ecological character of the forest, and also to understand its integration to a whole cultural system, biological, and ancestral in Lambayeque. From there we will have a closer approximation to the interpretation of the archaeological importance having been the cradle Pomac Forest of the most important pre-Hispanic cultures of northern Peru: Lambayeque culture, also called Sicán.
Then through a walk we will go to the Community of Pomac III, which people will receive us with the kindness which characterize them and will be proud to show us the fruits the generous Forest brings them.
During this visit we will appreciate The Peruvian Native Cotton (Gossypium barbadense) established as a legacy the ancient Peruvian people left to the world; as it was these through different cultures they used, developed and improved the use of this natural colored fiber for 5000 years to the present. One of its particularities is its natural range of colors which in the ancient times reached up to 11 shades of color giving the garments and costumes wore by the ancient inhabitants and officers of Lambayeque. We will know from the Cotton from the farmers themselves who will explain in the field the process of the sow, the rigorous care and harvest of this input that contributed significantly in the development of the civilizations of the Peruvian coast.
This particular fiber of cotton up to nowadays take life trough the work of woman who collect the antique tradition of making different items produced by the technique of the waist loom. On this visit we will appreciate from the hands of these artisans all the process that makes this beautiful fruit is transformed into works of art.
The Pomac Forest is also a provider of the best products for gastronomy, so outstanding highlights the fruit of the “loche”, which was established a s the main input who characterize the lambayecana food, which, has permitted to underline it as one of the best kitchens of Peru.
Particularly the area of the Forest of Pomac is recognized to be the lands where they cultivate the best “loche” of Peru. As a proof of its particular contribution to the food, we will taste a typical example of the regional gastronomy, prepared by the hands of the community people who keep the secret of the time that haunted the old masters of pre-Hispanic Peru and as at nowadays remains a national and world recognition.
After, we will visit Tucume and the Valley of the Pyramids: Pyramids and 26 religious groups spread on 220 hectares. Tucume is the biggest Archaeological Opencast Complex in the world, in the middle of an arid desert with a beautiful dry forest.
Return to hotel and overnight in Chiclayo.

In the morning, we will visit Huaca Rajada, the place where the Lord of Sipán was discovered and we will learn about the Moche culture.
Actually, the Lord of Sipan was a member of the Moche dynasty and the archaeologists tried to find out who exactly he was. According to recent excavations, it seems this man was the fourth character in the hierarchy. We will visit the fair new Site Museum of Huaca Rajada that exhibits his remains.
Our next point will be Lambayeque, where a delicious meal will be awaiting us.
After lunch, we will visit the National Museum Tumbas Reales, whose design was inspired by the Mochica truncated pyramids. The Museum is listed as the most modern in Latin America and one of the ten best in the world. The Royal Tombs Museum shelters real gems of Mochica art and keeps the remains of the old dignitary of Sipan.
Finally, transfer to the Chiclayo airport to get your flight back to Lima.

End of our Services

* Airfares are referential only.  Actual rate are subject to availability at time of purchase and type of ticket (refunds and changes allowed/not allowed, penalties apply/not apply, etc)

The Itinerary does not include: