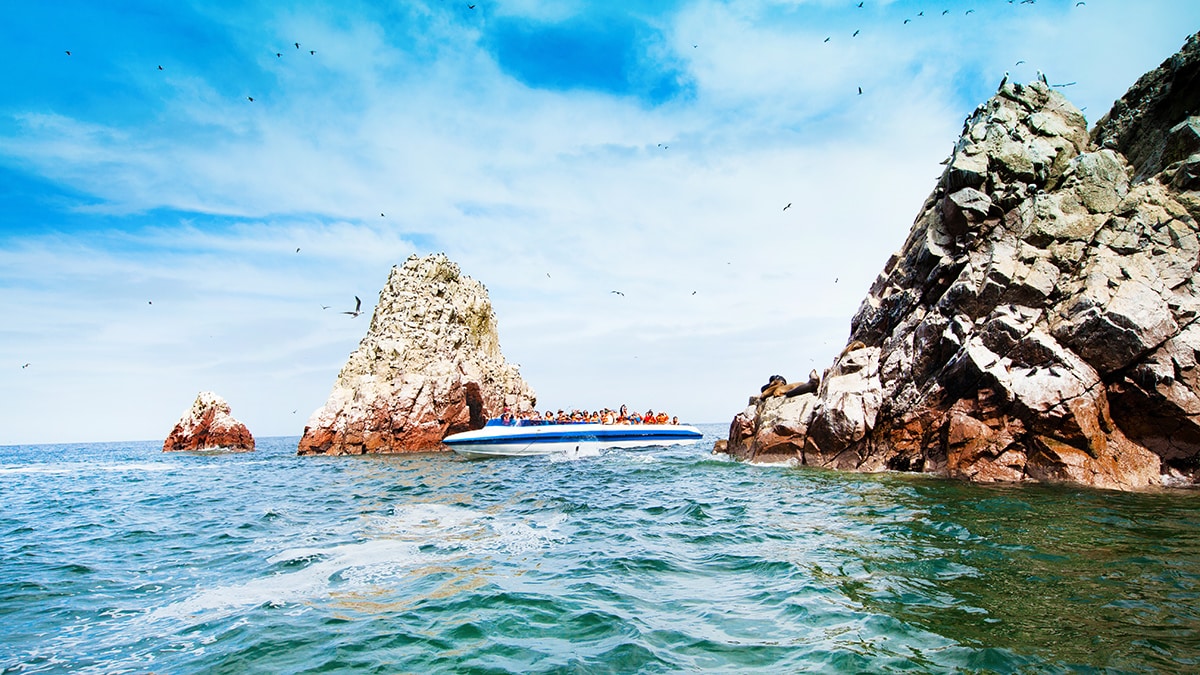 Discover this part of Peru located in Nazca lines.

The famous Nazca lines, which can only be seen from the air, were edged in the desert sands around 600 A.D. and its origin is still an enigma today. The Paracas National Reserve- including the Ballestas Islands- is a rich coastal eco-system, home to the most magnificent marine wildlife. A short ride away, lay the cities of Ica and Pisco, wine center and home to Peru’s national drink respectively.
The Nazca desert sands reveal treasures of ancient civilizations. Each of these figures extends for over 500 meters (1640 feet).
Ica, land of cotton and wine is full of history. In its desert plains, ancient Peruvians wove splendid robes of varied colors; mummified their dead with singular skill; and drew lines and gigantic figures in the desert as a homage to water or to interpret the messages of the Sun, the Moon and the Stars.

Nazca Lines
These Nazca Lines consist of furrows some 20 centimeters deep (8 inches) drawn in the shape of animals such as a hummingbird, a monkey or a fish, that are almost 500 meters (1,640 feet) long. The lines were studied by Max Uhle in 1901, by Toribio Mejia Xesspe in 1926, and it was Paul Kosok who made them known to the world in 1939. The German mathematician and student of Kosok, Maria Reiche, dedicated her life between 1940 and 1998 to protect these hieroglyphs, which were declared a World Heritage Site by UNESCO in 1994.
The figures, of animals and plants, total 32. The animals are mammals (whale, monkey, dog and two llamas), birds (heron, stork, pelican, gull, fisher bird, humming bird, parrot and others that are repeated), reptiles (crocodile, lizard, iguana and what looks like a snake), fish (two unidentified ones) and invertebrates (spider and snail). The figures of plants represent a huarango tree (carob), a cassava root, fresh-water weed and seaweed.
Maria Reiche believes the monkey may be identified with the Great Bear constellation. Doctor Paul Kossok, researcher of pre-Hispanic irrigation on the Peruvian coast, agrees, stating that the lines and figures refer to astronomy and climate. lf the theory is correct, this would be the biggest calendar in the world, The drawings would accordingly have served for ceremonies related to astronomy, astrology and religious worship, held in the mysterious desert.
Paracas National Park
The Ica region also holds the Paracas National Reserve (22 km south of the city of Pisco, at km 261 on the south Pan – American Highway). This rich coastal eco-system covers an area of 335,000 hectares (827,450 acres), that includes deserts, beaches, islands, cliffsides and ocean. This natural habitat is a haven for flamingoes, pelicans, penguins, dolphins, sea lions, sperm whales and an infinity of fish and crustaceans. Visitors to the reserve can sail northwest for an hour to reach the beautiful Ballestas Islands, a protected area of cormorants and sea lions.
The infinite nature of time can be sensed on looking at the horizon in this sort of living sanctuary for animals and birds that, as they break the reigning silence with their cries, know themselves to be the real owners of this space. A place of enchanting sunsets where color plays the lead, Paracas is proud to claim that, due to peculiarities of climate, king sun reigns there all year round.
likethis
Contact Us