Burrowing for the Future: Galapagos Petrels Are Nesting

Looking somewhat like the native pigeons of the Galapagos, Galapagos petrels are the smallest of seabirds in the whole archipelago. With white plumage and coffee-brown stains that gradually merge with their dark wings, Galapagos petrels are known for their sporadic and swift movements over sea – gliding rapidly over the waves and then darting away quickly. Some even compare the motion of their wings to those of a bat, due to their deep and heavy flapping motions. Locally, they’ve been given the name “patapegada” (glued foot) thanks to their webbed feet. 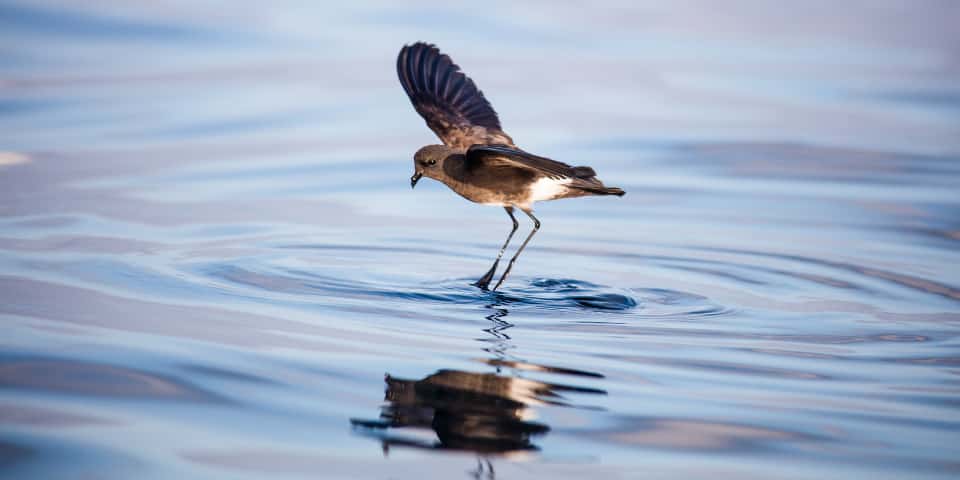 Encounter with the beautiful creatures in the Galapagos Islands.

Galapagos petrels display some pretty unique behaviour as they feed in the evening and visit their breeding grounds during the day. As pelagic birds however, it’s important to note that they only frequent landmasses when breeding. It’s still a mystery as to what they’re up to at sea (other than eating) when they’re not breeding, as scientists have a harder time spotting and following them in the middle of the ocean.
Despite their restlessness, storm petrels do balance their habit of staying out at sea for prolonged periods of the year by displaying a strong level philopatry – the term used for when migrating animals head back to a very specific place in order to breed or feed. In the case of Galapagos petrels, this almost always involves heading back to their natal colonies and/or nesting sites. Galapagos petrels mate for life and return to the same site every year during breeding season.
When they do settle down, Galapagos petrels make their nest in soft ground and burrow deep cavities to make their nest. Galapagos petrels might also choose to make their nest in sharp, volcanic crevices and cushion them with surrounding vegetation. Unfortunately, having their nests so low to the ground makes them extra vulnerable to introduced species such as rodents and cats.

Breeding season for Galapagos petrels typically occurs between the months of May and October. Pairs of petrels have monogamous bonds, meaning they only have one mate for life. This tight couple takes turns looking after the eggs and the chicks. Incubation of the eggs (the female lays two to four eggs) usually takes up to 50 days. After hatching, newborn chicks spend approximately 70-100 days in their nest before finally venturing out to sea. The Galapagos petrel spends years feeding out in the Pacific Ocean and  only come back to the Galapagos when they are mature adults and ready to breed.
Galapagos petrels nest on five of the islands in the archipelago – Floreana, Santa Cruz, San Cristobal, Isabela, and Santiago. Their nesting sites tend to be located up in humid regions (anything above 200 metres, typically) that help make burrowing in the ground a lot easier.
As a result of facing the highest risk of extinction for any bird in the archipelago, the Galapagos National Park has taken measures to eradicate rats throughout the archipelago, putting it high on their list of conservation priorities. This has the added benefit of not just helping protect Galapagos petrels, but also any native species in the archipelago that is threatened by the presence of these invasive rats.
Keep your eyes open while out at sea or on the islands with any Galapagos cruise that travels to the archipelago! There’s also Galapagos special deals available! You might just get lucky and get a chance to see these tiny birds fluttering about or tending to their nests.