From Quito to Chimborazo Pt. 1

When driving south along the “Avenue of the Volcanoes” – as Alexander Humboldt appropriately called the strip of the Andes mountain range that vertically divides Ecuador in two – you will encounter some of the country’s most amazing highland landscapes. Starting from Quito on a very clear day, you will get the chance to marvel at some of the country’s highest peaks. Visit the city’s TeleferiQo (cable car) that crawls up the slopes of Pichincha volcano and check out the majestic Cotopaxi volcano to the south, Antisana to the northeast and Cayambe to the southeast.
When coming to Ecuador, before heading to the beautiful Galapagos Islands and boarding the most amazing Galapagos expedition vessels, consider staying in Quito and the highlands. Take a couple of days to get closer to Ecuador’s majestic, snow-covered peaks and make sure you go down south to meet the father of them all, Chimborazo – the furthest point on Earth from the planet’s core. Learn about all the sites you will be able to see when travelling from Quito to Chimborazo. The views at this altitude will take your breath away – no pun intended. 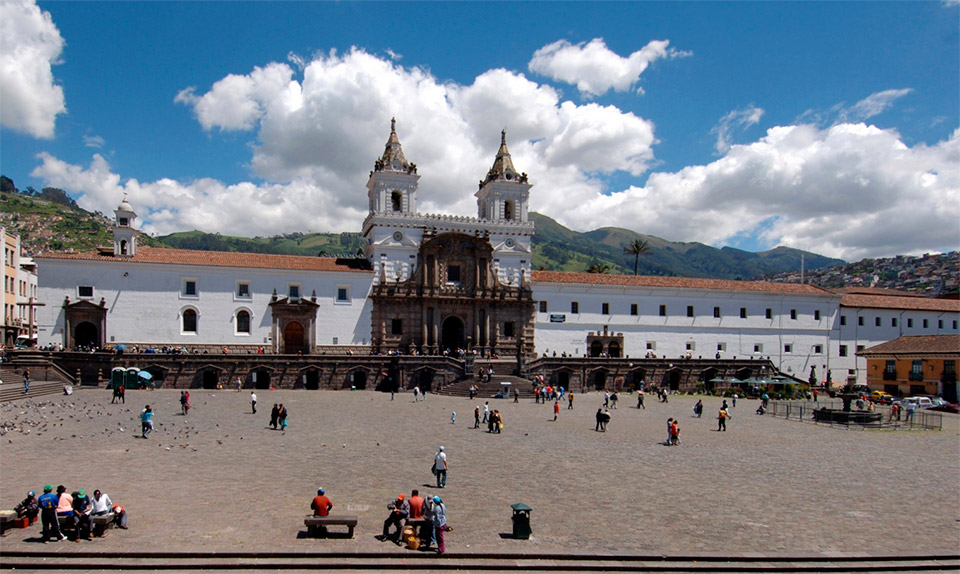 If you are planning to stop by Quito, we highly recommend staying at the very heart of the most beautiful colonial downtown in all of South America and one of the first World Heritages. Discover its gold-leaf covered churches, markets, museums and hospitable residents. Casa Gangotena, a renovated mansion that once belonged to a prestigious family, stands tall across from the San Francisco church and is the perfect starting point to begin your Andes adventure. Ask at the reception for help with planning your trip southwards.

From Quito to Chimborazo

When you start heading south you will see a gradual change in scenery. Before leaving the big city behind, you will get a glimpse of Quito’s southernmost neighbourhoods that extend across a valley that is rarely visited by the northern quiteños, and even less so by tourists. Immediately after leaving the capital, you will drive through green valleys and rolling hills that are flanked on both sides by the highest Andean peaks. Along the way, you’ll travel past some of the most renown mountains that are frequently visited by mountain climbers from Ecuador and around the world. Ask your tour guide or driver to point them out for you along the way. You will be able to see Corazon (Heart) and Ilinizas to the west, and Pasochoa, Sincholagua, Rumiñahui and Cotopaxi’s snow-covered cone to the east.

Going Off the Beaten Path

You can choose to drive through the main highway all the way to Chimborazo province, which is the home of the famous mountain after which it’s named. You can also take a couple of detours that will certainly give you a richer Ecuadorian Andes experience. If you are hungry, stop for some chugchucaras over in Latacunga, the capital of the Cotopaxi province. This local delicacy that contains some of the region’s favourite ingredients. Not far from Latacunga, the town of Salcedo is the place to stop for dessert, given that the Salcedo ice cream is an Ecuadorian favourite.
As you keep driving south, the landscape starts turning flatter and drier until you reach the city of Ambato – capital of the Tungurahua province and famous for its fruits, flowers and nutrient-filled soils. You can stop here to try yet another traditional dish called cuy (guinea pig) over in the beautiful neighbourhood of Miraflores. In Ecuador, cuy is an expensive dish commonly eaten on special occasions in regions that tend to have a stronger indigenous influence, such as Tungurahua, Imbabura and Chimborazo. We recommend you give it a try! However, we understand it’s a delicacy for the bold and daring.

Once in Ambato you can drive to Riobamba, capital of Chimborazo province. This is a lively town with a beautiful colonial church and the overwhelming presence of Chimborazo lingering on the horizon. Chimborazo volcano is about an hour away. You can also take a lesser known detour – the old road to the city of Guaranda, in Bolivar province – called Vía Flores that connects the city of Ambato directly to the volcano. It runs across some very narrow cliffs and follows the path of the Ambato River. At the end of this road, right before catching your first glimpse of Chimborazo, you will find a hidden visitor site known mostly by the locals in the area which are the hot springs in the region of Aguas Calientes. Have your bathing suit ready and enjoy the warm waters with the locals in this off-the-beaten-path experience. Minutes away from this secret spot you will be met by the giant – the massive Chimborazo. As you travel towards it, you’ll venture across the moor plain that the volcano sits in called El Arenal desert, a very rough landscape inhabited by llamas and vicunas. On a clear day, you will get to see the grandiose Chimborazo with its snow hat, quietly reminding us all how small we really are, and how beautiful the world really is. Have your eyes and camera ready, and be prepared to be blown away.
Click here to read From Quito to Chimborazo Pt. 2!