Carnival in Guaranda: Soak up the fun during one of Ecuador’s hottest festivals

When it comes to Latin America, we’ve all heard the word “carnival” mentioned at one point or another, but besides all the fun and color and water that swirls around – what’s Carnival really about? In this post, we invite you to come on a brief tour that covers the history of Carnival in Guaranda and the traditions that take place specifically in this community – a city in Ecuador located in the province of Bolivar which is known for its lively and festive Carnival.

Looking Back: A Cultural Fusion

From the Andean side of things, it all began with giving thanks. The ancestral tribe known as the Huarangas would use this three-day celebration, held during the second full moon of the year, to honor the chief of their tribe as well as praise Pachamama (Mother Earth). The celebration would typically involve singing, the playing of instruments, dancing and drinking chicha (a fermented corn beverage) as well as the now iconic throwing of water or, sometimes, even corn flour at one another. 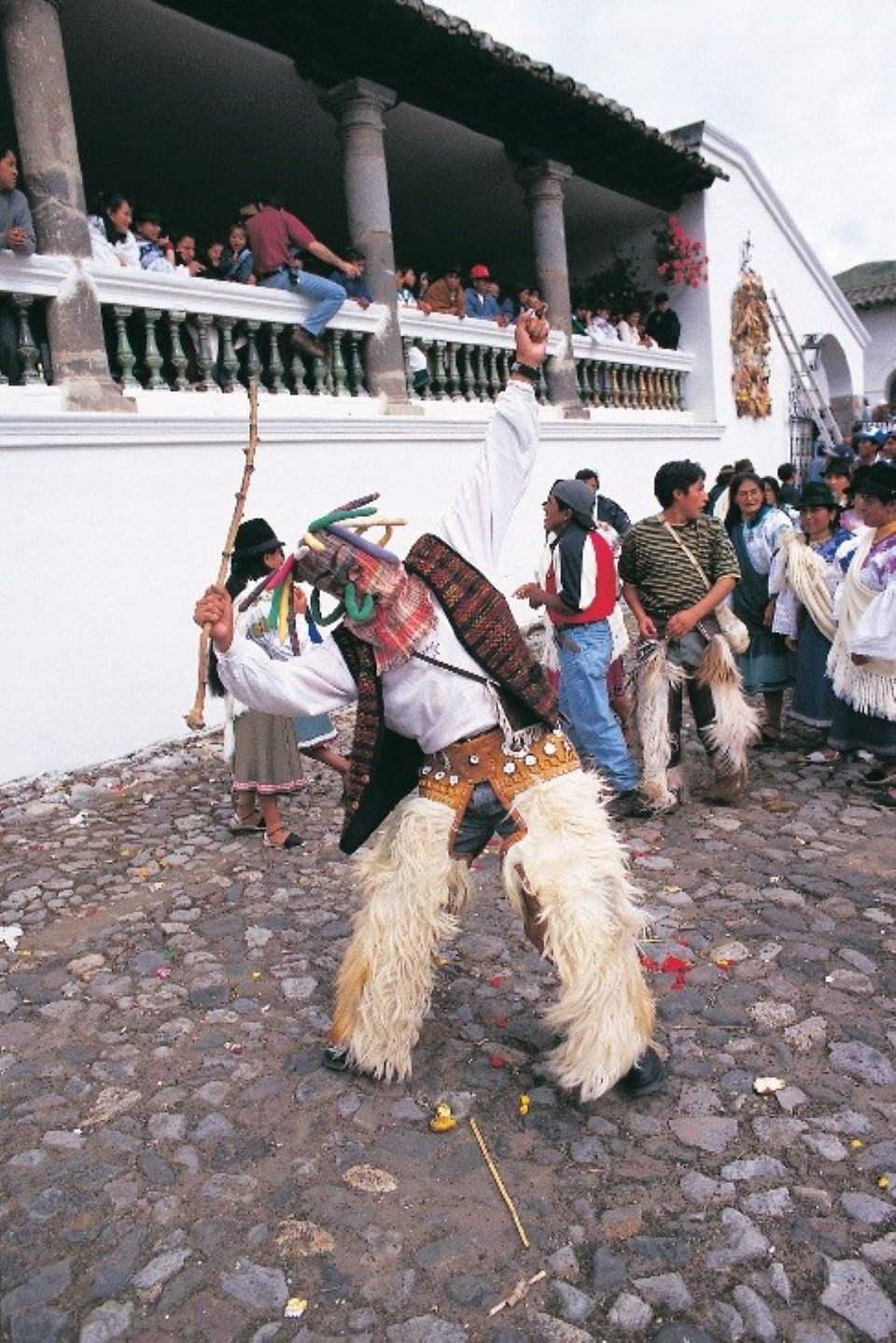 A man dances eagerly while wearing his traditional Carnival attire which consists of an Aya Uma mask and Chagra pants.

From the European side, it was all a matter of Lent. It´s actually believed that the word “carnival” actually derives from the Italian word “carnevale” which itself is an interplay between the words in Latin that refer to the withdrawal from meat and the beginning of Lent.
It was this peculiar coincidence of two traditions that ultimately fused into what is now seen during Carnival in Guaranda. Spaniards that arrived in Ecuador ended up using local rituals – these of which pertained to the fertility of nature as well as the beginning of the blooming season – as a foundation for introducing and adapting their own traditions.

Present Day Carnival in Guaranda: A Dance of Color and Water

As is tradition, Carnival in Guaranda begins with the entrance of “Taita Carnaval” strolling into town – a role usually played by one of the wealthy landowners near town who also serves as a sponsor of the carnival itself. Following his entrance and the gratitude presented to him, the festivities commence with plenty of drink and fried food being prepared inside homes or right on the street, with the smell of fritada con mote (boiled and fried pork with corn kernels) floating about the streets, mixing itself with the occasional and pungent smell of alcohol, be it chicha or aguardiente.

Music roars out onto the streets in the form of blaring trumpet horns and the beating of drums as children (or even adults) race to splash each other with buckets of some rather chilly water or sometimes even silly string. The streets at this point simply become an arena of playful chaos. Traveller be warned: there is no opting out of this experience if you find yourself on the streets during Carnival in Guaranda, so be sure to keep all your valuables and electronic devices sealed up inside zip lock bags!
Carnival is a fascinating time of year, but don’t forget that getting wet can also be experienced in an even more magical way over on the Galapagos Islands.