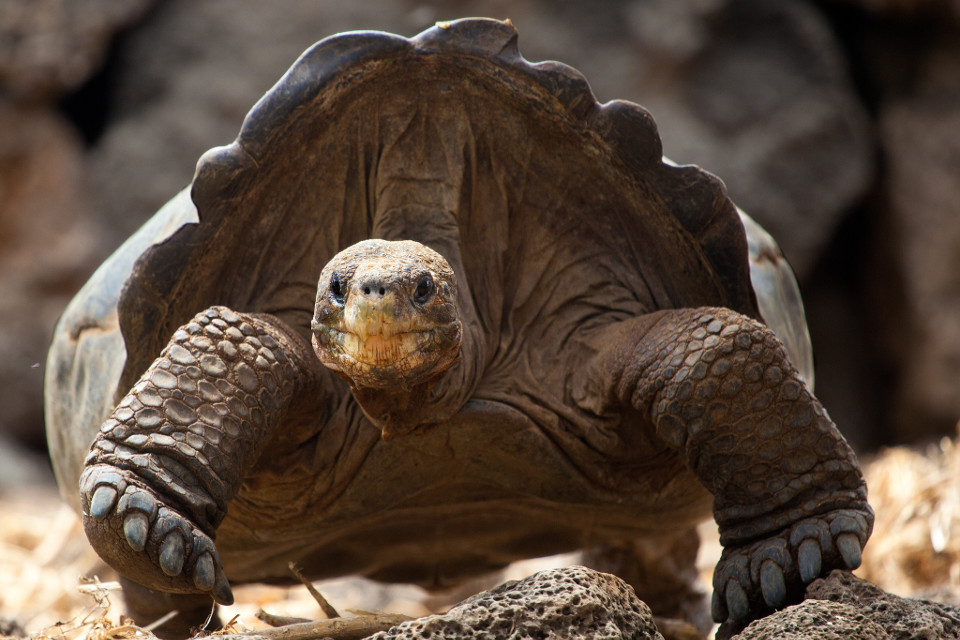 According to a report released by the Galapagos National Park (GNP) on Tuesday, 20th December the population of the endemic giant tortoise species Chelonoidis chatamensis is in the “process of recovery.” Chelonoidis chatamensis is one of the eleven species of giant tortoises that live on Ecuador´s Galapagos Islands.
The census, conducted by GNP in October, made a historic count of land tortoises in Galapagos. The study estimated the population of Chelonoidis chatamensis at around 6,700. From an ecological perspective, the high percentage of juveniles and females marked in the study suggests that this species can be considered in a process of recovery.
The population of this species, endemic to the island of San Cristobal, which originally ranged between 12,000 and 25,000 individuals, dipped down to as low as 500 individuals during the 1970s. This decline was due to a range of factors, including human exploitation, introduced predators, and changes in local vegetation.
Previous National Park estimates of the population of this species were around 1,000. The census expedition covered 150 km2 of San Cristobal Island. During the count, investigators marked 1,938 tortoises, including 928 juveniles and 152 that had been born recently.  They also took blood samples from 400 animals in order to test the population’s genetic health.

“The GTRI works with all endemic giant tortoise populations of the archipelago. One of our priorities, however, is to study the lesser known species, like the San Cristobal endemic giant tortoise. This work will generate sufficient knowledge to allow the Galapagos National Park Directorate (GNPD) to implement effective management measures to ensure the conservation of not only the tortoise population but also the ecosystem they inhabit,” stated Wacho Tapia, the leader and coordinator of this expedition’s research and a scientist at the Galapagos Conservancy. “As ecosystem engineers, giant tortoises, through their activities and movements, contribute to the ecological integrity of their islands.”
Furthermore, during the expedition researchers were able to monitor two of San Cristobal´s endemic plant species, finding 69 specimens of Calandrina galapagos and 1049 Lecocarpus leptolobus, both of which are considered critically endangered by the International Union for Conservation of Nature (IUCN).
This report is encouraging for Galapagos conservationists concerned about Galapagos tortoises. Just four years ago the death of “Lonesome George” marked the extinction of Chelonoidis abigdonii.

likethis
What's your reaction?
Useful
0%
Not useful
100%
Posted In
Galapagos, Nature and History
Tags
You might also like
Read More