Ecuadorian gastronomy is something that is yet to be discovered by the world’s palate. Compared to our more culinary famous Peruvian neighbours, our local gastronomy is not one of the first things that come to mind when people think of Ecuador. Yet, due to our privileged location on planet Earth, our soils benefit from constant rains and sunshine, making it possible to enjoy fruits and vegetables all year long that would otherwise only grow during certain seasons in other parts of the globe. Therefore, I often marvel at the fact that Ecuador’s cuisine is still unknown to many travellers. Ecuadorian ingredients are waiting to be discovered!

Culinary traditions have been handed down from generation to generation, occasionally adapting themselves to modern times, but always keeping their essence. Ingredients that were used by pre-Hispanic cultures are still used today while others, like specific types of tubers, have lost their place to more common, easily grown ones.
With this blog, we present you with our top 3 picks of some of the most commonly used Ecuadorian ingredients that are vegetarian. If you are thinking about trying some Ecuadorian delicacies, why not get started with some basic knowledge on the matter?

Even though there are more than 4,000 varieties of potatoes in the Andean regions of Ecuador, Peru and Bolivia, people generally refer to them simply as potatoes. Most of the time we aren´t even aware of the type of root we might be eating, but the differences will certainly not escape the palate of an expert. Ecuadorians use potatoes in many different dishes, from stews, to almost every kind of soup such as the famous locro de papa (creamy potato soup) or llapingachos (cheese-filled potato patties). Try both of these delicious dishes in one of Quito’s best restaurants at Casa Gangotena. You will want to take the recipes back home! 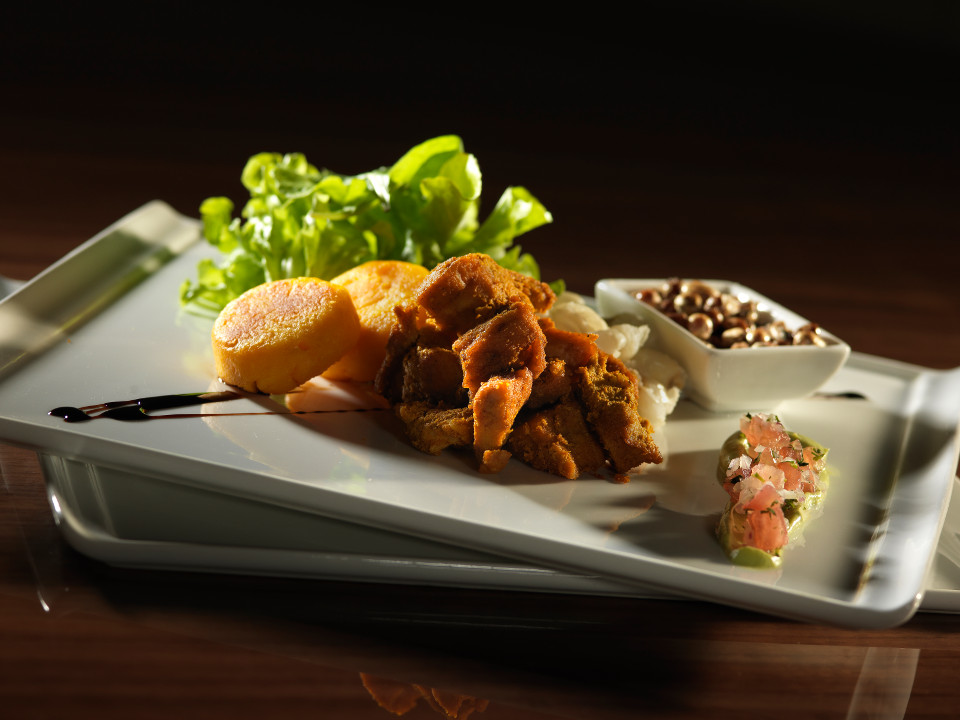 Potatoes are one of locals favourites Ecuadorian ingredients: Llapingachos with fritada (fried pork with achiote and spices)

For visitors coming to Ecuador, finding out about the several types of bananas and plantains that exist is usually quite a surprise. The common sweet banana sold at supermarkets is what the world is used to, and the Ecuadorian banana has made a name for itself outside the country’s borders. But in Ecuador alone there are 300 types of bananas, five of which are frequently used as part of everyday dishes: the orito (baby banana), green plantain, ripe plantain, red banana, maqueño and cavendish – the normal banana everyone knows and loves.
Many dishes are prepared with these different plantains (both green and ripe), such as bolón de verde (mashed green plantain prepared with cheese and pork and moulded into a ball), patacones and chifles(cut and fried pieces of green plantain that are served as a side dish – chifles are more thinly cut than patacones), empanadas de verde (green plantain pasty’s filled with farmer’s cheese), maduro frito (fried ripe plantain) or cazuela (mashed green plantain prepared with peanus and spices along with fish or sea food). When you order a ceviche in Ecuador  -and you will most defenitely want to try our Ecuadorian ceviche at Finch Bay Galapagos Hotel– it will always come with some patacones or chifles as a side dish: a perfect combination. The possibilities are endless! 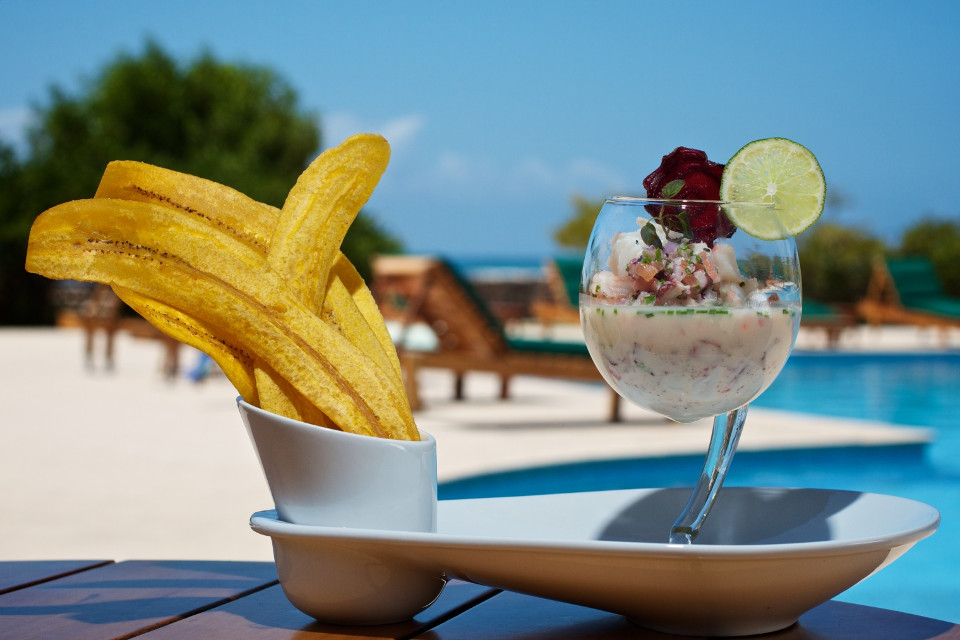 Green plantain prepared as chifle, to go with a traditional Ecuadorian ceviche

The existence of more than 400 varieties of corn have been recorded in Ecuador, yet not many are cultivated and prepared on a daily basis. Knowledge about their history and the importance of their specific variety unfortunately not been handed down, much like with potatoes and bananas. In spite of this, corn is a staple in Ecuadorian food and is prepared in many ways. You can find it being grilled and sold on the street, which you can combine with cheese sauce or grated cheese. You can also find it as part of traditional Ecuadorian dishes that include: humitas (ground corn filled with cheese that´s wrapped in a corn leaf and then steamed), chicha (brewed drink made from ground maize), mote (boiled maize) or tamales (ground corn filled with chicken or beef that’s wrapped in a banana leaf and then steamed). It is also one of the 12 grains used to prepare the famous Ecuadorian dish made during Holy Week known as fanesca.

likethis
What's your reaction?
Useful
50%
Not useful
50%
Posted In
Blog, Ecuador
Tags
You might also like
Read More