Earth Day and the Galapagos Islands: Why We Care

The Importance of Earth Day and the Galapagos Islands

Ever since Earth Day was founded on 1970, it has been able to show, recruit, teach and vocalise the world’s increasing concerns on all matters environmental. It is not a subject to be taken lightly since it concerns each and every inhabitant of this beautiful “pale blue dot suspended on a sunbeam”, as Carl Sagan wisely said one day. That is how Earth Day and the Galapagos Islands are related.
This 22nd of April, the world will celebrate Earth Day’s 47th anniversary. We want to take this opportunity to keep on doing what we do best: take care of this planet’s most beautiful sites, protects its fragile ecosystems, and transmit our message of love for nature.
Below we present you with some interesting facts about Earth Day:

How Did Earth Day Come to Be?

One April 22nd, 1970, 20 million United States citizens massively took to their streets and parks to voice concern about environmental issues. It had been an extremely convulsive year, filled with sad news ranging from the death of rock idol Jimmy Hendrix to tragic losses in the US war against Vietnam, and the country’s youth had had enough. Inspired by the anti-war movement and feeling helpless after witnessing the Santa Barbara oil spill, Senator Gaylord Nelson from Wisconsin saw the need to raise consciousness about air and water pollution and asked for the support of Republican Congressman Pete McCloskey and Harvard professor Denis Hayes. Their early efforts became what we now know as Earth Day, which was recognised worldwide in 1990. 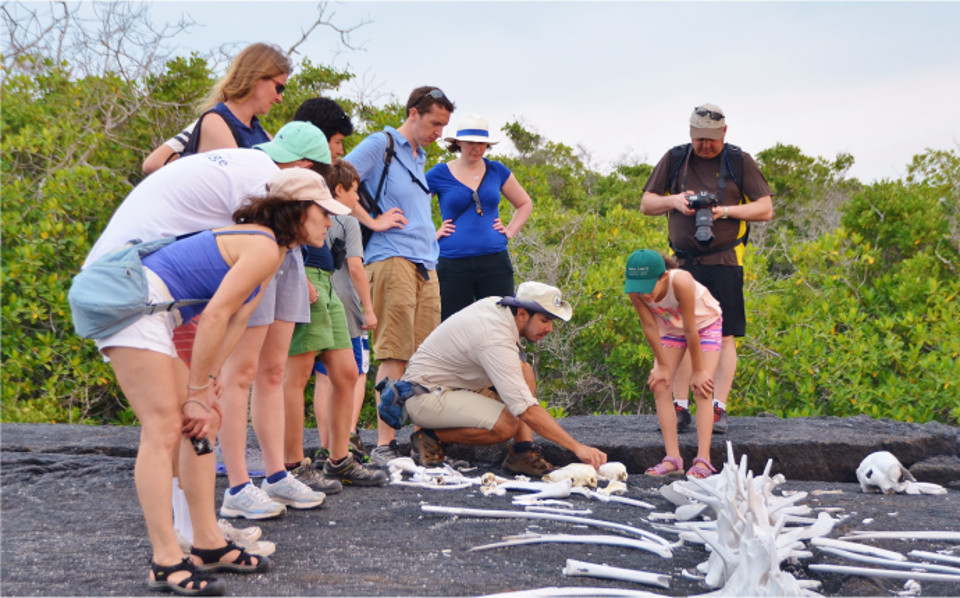 Our guests enjoy taking care of the environment.

What is This Year’s “Earth Theme?”

Every year a new “Earth Theme” is selected as the core message for the commemoration of Earth Day. This year’s campaign will focus on Environmental & Climate Literacy. No real progress can be expected if people do not have the right tools to direct themselves towards it. That is why education is key! Everything must be learned in order to be implemented, and this applies equally to concepts of climate change and environmental awareness. Only through the access to knowledge will the population be empowered to act upon this knowledge and demand change. For this reason, each day and at each of our ships and hotels, we aim to make our guests feel that they are a part of something bigger, that their small acts can lead to large changes. And of course, as a company we try to “walk the walk” as well as “talking the talk” by constantly improving our infrastructure and systems in ways that help us reduce our environmental footprint.

How Many Countries and People are Involved on Earth Day?

A promising 200 million people in 141 countries are actively involved in Earth Day: organising environmental activities, raising awareness, voicing concerns, and taking action. Each step, big or small, leads towards a more aware and compassionate planet. Each day offers an opportunity to actively and positively affect your community, to teach younger generations and to lead through example. Earth Day, proudly known as the largest secular observance in the world, is a continuous work in progress.

How Many Partners Does Earth Day Have Around the Globe?

The Earth Day Network is currently comprised by more than 50,000 partners in 196 countries who make it their life’s mission to protect this planet’s ecosystems. This makes EDN the world’s largest recruiter of any environmental movement and a key player in finding local and global solutions to the world’s environmental problems.

What Kind of Solutions are Possible?

Small changes can have a big impact! Even though it sounds like very little, “just” by reducing our waste by 1% per year and recycling and composting 90% of the trash generated by human consumption, we could save 406 megatons of carbon dioxide by the year 2030. To put it in comprehensible terms, this is the equivalent of shutting down 21% of coal power plants in the United States.

Metropolitan Touring has a unique appreciation for the importance of Earth Day thanks to its dedication to working in iconic privileged locations such as the Galapagos Islands and Mashpi Reserve. The archipelago has long been considered a living laboratory for evolution and numerous scientific areas. Mashpi takes kudos as 1 of the 16 hotspots for biodiversity on Earth . We have dedicated lifetimes to working with guests, local communities, scientists, governments and more to preserve what we love and we hope to continue to share them with future generations. This is our conviction and our commitment.
A history of promoting environmental literacy and action 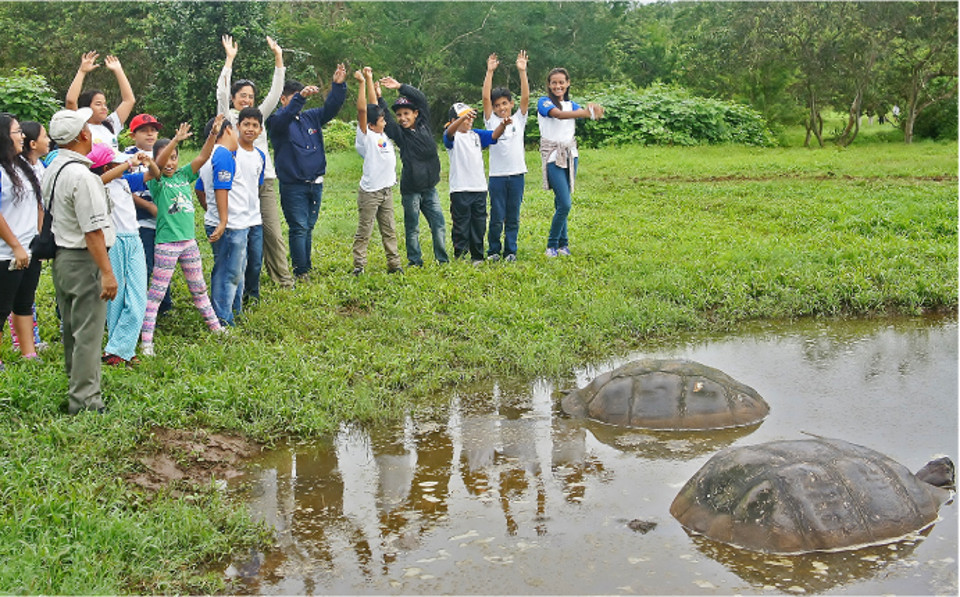 For years, Metropolitan Touring’s Fundación Galapagos Ecuador worked with the Municipality of Santa Cruz Island to foster the first-ever recycling initiative on the islands, as well as performing coastal cleanup efforts with local fishermen and the community. Local students have benefited as well with a program that to this day provides free space on board our Galapagos vessels for continuing education. At Mashpi reserve on Ecuador’s mainland, our focus on research has already paid off with discoveries of new species and master classes that raise environmental awareness. Each day we actively contribute by reducing our environmental footprint and educating global citizens about the importance and interdependence of all the elements of these incredible ecosystems and their relationship to the world.

The Mechanics of CO2 Emissions in Tourism

Tourism has often been called “an industry without a chimney” but tourism operations – if not handled in a sustainable manner – can cause significant damage to fragile environments. Our research shows that each of our guests in Galapagos and Ecuador, during their stay with us, releases approximately 1 ton of CO2 into the atmosphere, due primarily to transportation logistics. Luckily, this is more than offset by the 1,300 hectares (3,200 acres) of primary tropical cloud forest in the Mashpi Reserve, a conservation property that constitutes the fraction of the Choco bioregion remaining in Ecuador after years of deforestation. One tree growing in a well-developed forest is enough to offset 1 ton of carbon dioxide, as well as protecting unique biological processes and conserving flora and fauna for all of humanity. So, in fact, our Mashpi Reserve is not only compensating for our tourism activities overall but also is serving as an oxygen factory and a treasure chest of biological knowledge and genetics that over time, will contribute to environmental sustainability for the entire world. 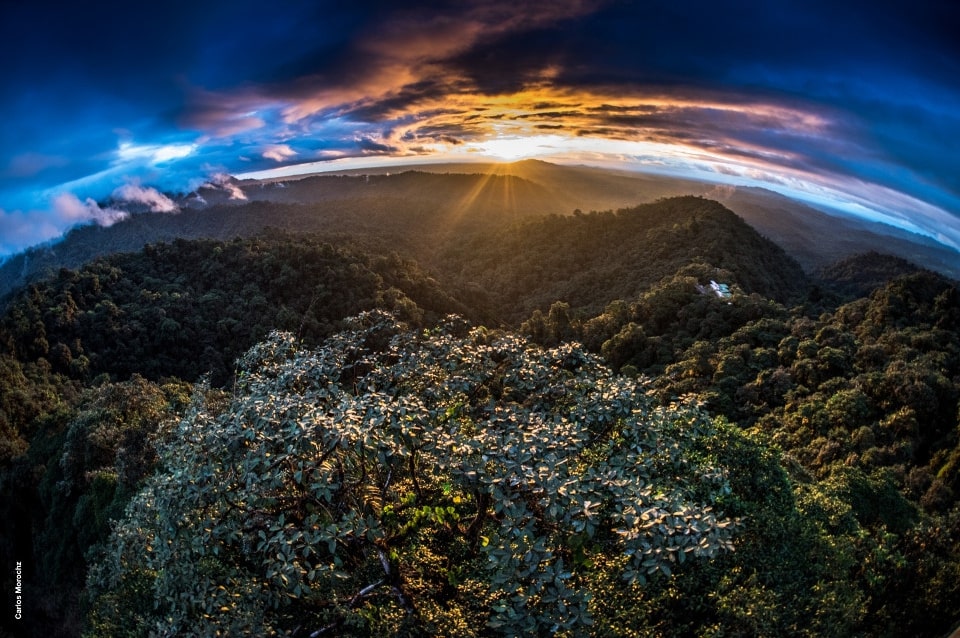