Even for Spanish speakers, the name chugchucaras is not easy to pronounce. But ultimately, it’s the content that makes it totally worth a try. This Ecuadorian dish, representative of the old town of Latacunga, is well-known beyond its borders. The city of Quito is a must-stop for anyone coming to Ecuador. This World Heritage site is the perfect place to set up camp and visit some of the beautiful natural and cultural sites that surround it. Every visitor heading up north will certainly pass Latacunga, which is located on the skirts of the indomitable Cotopaxi volcano. Even though the new highway goes around the small city, many tend to take the older route that goes right through the middle of Latacunga just to taste its emblematic dish.

The City by the Volcano

This dish from the small city of Latacunga holds many ingredients that are representative of the Ecuadorian Andean region. This comes as no surprise considering it is located right at the heart of the mountain range, which is dominated by the magnificent Cotopaxi – one of the world’s tallest active volcanoes. Those who have seen the volcano would agree that the word magnificent would do it justice. Even when seen from the city of Quito, Cotopaxi – meaning “neck of the moon” in quichua – looks like an ominous guardian.

On a clear day, the scenery on the way Latacunga will leave you speechless. It is no wonder it is called the “Avenue of the Volcanoes.” As you approach the town, you will feel a visible contrast between its surrounding neighbourhoods. At a first glance and unlike its lovely downtown, Latacunga is not quite easy on the eyes. The downtown area holds a couple of historic gems and its central plaza is a beautiful reflection of its colonial past. Visitors who drive through Latacunga usually only do so to have some of its famous chugchucaras, but if you are already there and you can spare a minute be sure to check out its true Andean colonial downtown.

A Dish of Many Layers

Chugchucara is a traditional dish that has been passed down through generations. It is usually sold as street food but since its rise in popularity a few decades ago, many restaurants took the opportunity to offer it as its main dish alongside other local recipes. We recommend you go on an empty stomach because chugchucaras are quite satiating, to say the least. First of all, you are served an entrée of mote (boiled corn) with chuzo fritada (fried pork leftovers), and aji (chili sauce). Immediately after, the main dish is served: empanadas (sweet, cheese-filled pasties), potatoes baked in pork oil, fried sweet plantain, popcorn with toasted corn, fritada (fried pork), topped with the “protagonist” of the entire plate and many Ecuadorians’ favourite – cuero (fried pork skin.)

It is a dish filled with intense flavours, spices, textures and colours. Talk about a treat for the senses! Because cuero is not eaten with a fork and knife, you will soon find this dish is better eaten with your bare hands.

Many visitors coming to Ecuador make the amazing Galapagos archipelago their main destination, but do not forget about the Ecuadorian Andean region which is rich in culture and filled with the most stunning views. Stay in the most fascinating and elegant hotel of Quito’s historic downtown, Casa Gangotena, and marvel at what the capital and its surroundings have to offer. Plan a trip to see the breath-taking Cotopaxi volcano from up-close – only a two-hour drive away from Quito – and take the opportunity to try Latacunga’s famous chugchucaras. Fill up your time in Ecuador with some intense flavours! 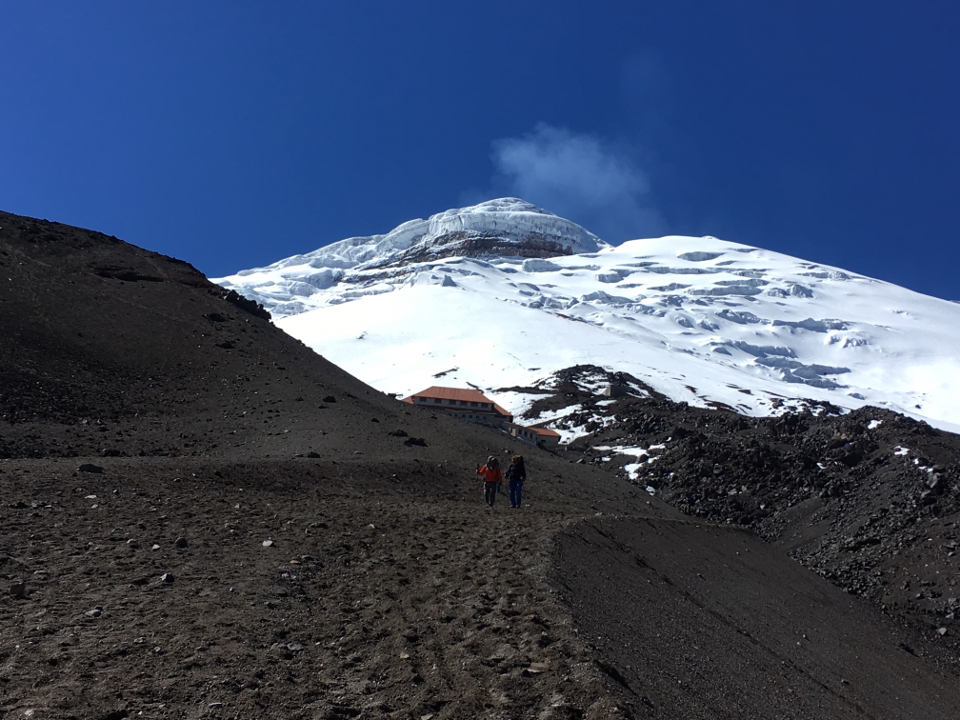 Don’t miss the opportunity to be this close to the Andes Mountains Photo credits: Nathalie Moeller

likethis
What's your reaction?
Useful
50%
Not useful
50%
Posted In
Blog
Tags
You might also like
Read More