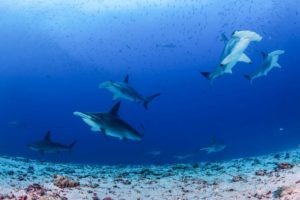 On Monday, March 21, 2016, President Rafael Correa of Ecuador signed into law the creation of the Darwin and Wolf Marine Sanctuary, covering 18,000 square miles (47,000 square kilometers) of waters surrounding Darwin and Wolf Islands. This area represents approximately one third of the water around the islands and is approximately the size of the country of Belgium. The sanctuary, which forms part of the 80,000-square mile marine reserve created in 1998, will increase the already-high level of environmental protection by fully prohibiting all extractive industries, including fishing, oil extraction and mining.

The area serves as home to numerous marine species, especially sharks. According to reports, “more than 34 different species of shark can be found off the shores of the Galapagos including the largest shark species, the filter-feeding whale shark, the migratory hammerhead shark and the Galápagos shark.” Scientists particularly appreciate the opportunity that this “no-take” zone offers to hammerhead sharks, a species in danger of extinction, and whale sharks, who use this area as their only migratory breeding grounds in the world.

The declaration as a marine sanctuary means that no fishing will be allowed in the area. This decision will protect the incredible fish biomass identified in the area: 17.5 tons per hectare on average according to a new study by Pelayo Salinas of the Charles Darwin Research Station. National Geographic notes that “That’s about twice as high as the second highest area known to science, the nearby Cocos Island National Park, Costa Rica.

In a well-received paper, Boris Worm and co-authors estimate that shark populations around the world are being killed at a rate between 6.4% and 7.9%, often as part of illegal trade in shark fins used in a soup that is considered an Asian delicacy. This level of killings surpasses the population regrowth rate and runs the risk of decimating numerous shark species, which are often the top predators in their food chains and therefore threaten entire ecosystems. 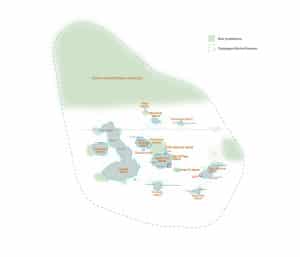 The move, made with support from the National Geographic Foundation, includes certain compensation funds for local fishermen and the expectation that catches outside the area will actually increase from spillover. Tourism will be permitted in the sanctuary and represents a major benefit not only for the local population but for the country of Ecuador as a whole. National Geographic’s Pristine Seas project has estimated that a shark left alive is worth almost $5 million in tourism income over its lifetime versus only $200 when caught and sold by a fisherman.