With an overwhelming amount of news pouring out regarding natural events throughout the world, the Andean region tends to sound like the victim of Mother Nature’s less-than-ideal “moods.” Earthquakes and exploding volcanoes tend to take the spotlight when it comes to these natural occurrences along the Avenue of the Volcanoes, and with good reason – nearly half of South America exists on or along the Andean Mountains.
But the reality of the situation, specifically here in Ecuador, is actually far less perilous than the media would have you believe. Granted, there are risks along the avenue of the volcanoes, but these are greatly outweighed by the natural beauty and splendour that the region offers.
In fact, the Andean region tends to pale in comparison to the nearly 10,000 earthquakes and 300-400 fires that California experiences. Add to that the abundance of hurricanes that the Caribbean experiences, and the numerous typhoons that Asia endures, and Ecuador actually seems pretty tame in comparison.

Civilization seems to have draped itself zealously across the Andes and its surroundings. From the bottom of Chile all the way to the edges of northern Colombia, the Andes Mountains are a constantly looming sight that serve as the geological spine for civilization in the region. It’s a pattern that dates all the way back to the great empire of the Incas, an ancient indigenous civilization that was fixated on the sun and everything under it: from the mountains to the valleys, to the rivers and beyond. Their admiration and interest in these areas were augmented, too, by the fertility of these volcanic lands. For these cultures, living along this “risky” avenue of the volcanoes was something they were willing to accept as part of their close connection with the natural world.

A Silver Lining Around a Ring of Fire

The optimists might call it destiny, others might call it an unfortunate state of affairs, but one thing holds true – the Ring of Fire governs the region’s geological phenomena. Any territory or island that finds itself along its rim is exposed to various natural risks; specifically, they’re all at the whim of gigantic, shuffling tectonics plates, known in geological terms as subduction, in which one plate tends to move under another forcing one or another plate to sink into the mantle. The subduction process that occurs along the Ring of Fire leads to recurring seismic activity as well as occasional volcanic activity along its circumference. 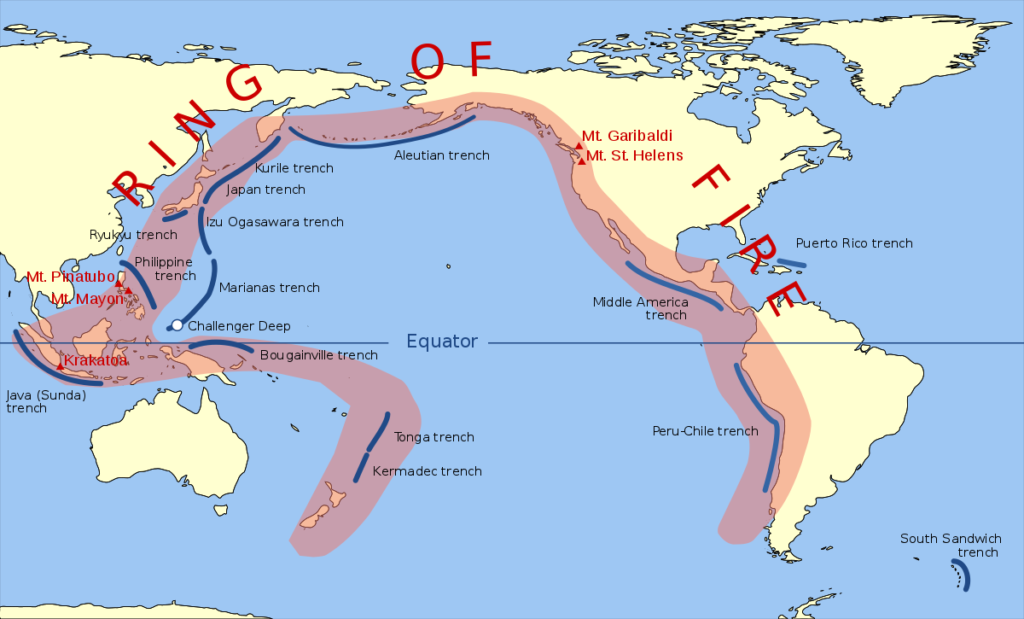 The Pacific Ring of Fire. Photo Courtesy of: Gringer (Wikipedia).

But this is something Ecuadorians have come to accept as the price they pay for the majestic beauty of the country’s spectacular mountain ranges, jaw-dropping valleys and the luscious scenery that dominates the land. The snow-capped volcanoes that serve as beacons to orient the population both spatially and spiritually, are just the icing on this geographical cake. Some of these ice-covered behemoths are active but many are dormant. And in the Galapagos, most of the islands stem from volcanic formation, although today, most of them are inactive.

Along the Avenue of Volcanoes: Living with Raw Forces of Nature

The much-revered Pachamama (Mother Earth) has her own way of speaking. And when she’s angry, the earth shakes…sometimes literally. In Ecuador, seismic activity is the result of two different types of events: tectonic movement or volcanic activity. The tectonic events affect continental Ecuador due to the subduction of the Nazca plate, while the volcanic events stem from the magmatic elements found inside the volcanoes themselves. These processes are natural, unpredictable and, in their own way, thrilling: Visitors and locals alike have been known to look for safe places to view and photograph live volcanic eruptions.

The planet undergoes roughly 1,200 to 2,000 seismic events every day, but most of them go unnoticed. The majority of these earthquakes occur along the geological fault lines that are found throughout the planet. Not surprisingly, the Andean region has far more fault lines than, for example, the noticeably flat, Midwest region of the United States. This is why it got its name – the avenue of the volcanoes.
Luckily, only a small handful of Ecuadorian volcanoes show signs of regular activity which alternate through periods of medium and low levels of risk. Events such the infamous earthquake that hit the coast of the country in April 2016 are unique events that are extremely rare and similar movement can occur anywhere along the Ring of Fire.

Giving Thanks for the Avenue of the Volcanoes

What’s more, we give thanks for these unusual geological exceptions. If it weren’t for the presence of the Andes Mountains, certain types of tropical environments wouldn’t even exist. The mountains create fascinating microclimates and homes for a plethora of flora and fauna that may represent new cures for human disease as well as continued settings for unique local cultures. Alexander Humboldt recognized this unique situation and determined that is the basis for tropical biodiversity. The Andes Mountains divide the country, leaving rainforests on either side of the ridge: the Amazon to the east and the Choco, home to beautiful Mashpi Lodge, on the west. Foothills on either side serve as beautiful slopes for the enigmatic fog that envelopes our thoughts as we ride down into worlds that change with every 100 metre drop in altitude.

Amazing view of Mashpi Lodge and the cloud forest.

The indigenous people of Ecuador, and the European conquerors who joined them, learned over millenia to live in peace with the semi-gods of the volcanoes. The special energy emanating from this equatorial paradise permeates all facets of society and gives us everyday reasons to be thankful for life. Ecuador constitutes one of the most dynamic and energetic places on Earth!